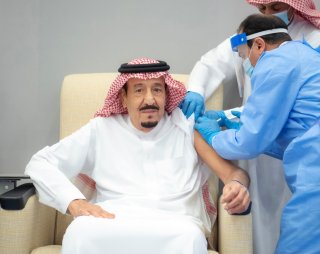 The Covid-19 pandemic has fostered a global state of distress which compelled Middle Eastern countries to grapple with a much more uncertain and deteriorating socio-economic environment. The public health situation remains critical in the region, although most governments do not publicly provide comprehensive and viable epidemiological data. In that respect, Middle Eastern countries have tried to secure sufficient doses to vaccinate local populations. The vaccination onset has yet displayed a two-tier system in the region where oil-rich Gulf countries managed to acquire and deploy a wide array of vaccines within a brief timeframe while troubled nations such as Yemen or Lebanon have to settle for limited doses with blurry deadlines for shipment and questionable distribution plans. From the American Pfizer to the Chinese Sinopharm, Middle Eastern countries take advantage of a broad choice of vaccine manufacturers to overcome the pandemic while the suppliers tend to integrate a geopolitical factor with a “vaccine diplomacy.” A concept which consists in using the vaccine to meet foreign policy aims.

China’s decision to promote its Covid-19 vaccine worldwide tends towards a geopolitical-driven policy. The Chinese government has indeed displayed a strong ambition to turn its vaccine diplomacy into a soft power vehicle to expand its influence over well-established economic and trade partners as well as traditional United States allies such as Pakistan and Turkey. China has been dealing with a tarnished reputation within the international opinion since the pandemic outbreak. The vaccine diplomacy appears embedded in a wider public relations damage control to counteract widespread criticism. To this end, the Chinese government has anticipated the European Union and the United States’ resolutions to preemptively stockpile locally-manufactured vaccines (Pfizer - BioNTech, Moderna, AstraZeneca) for domestic use by offering its international partners to join the Sinopharm vaccine clinical trial.

Hence, the United Arab Emirates became the first country to join the Sinopharm vaccine’s phase three clinical trial in June 2020 along with Morocco, Egypt, Jordan, and Bahrain thereafter, five long-standing American allies in the Middle East. Alongside the foreseeable desired purpose to offset the American presence in the region, China seeks to expand its influence by turning its major economic and commercial relations into more integrated partnerships. The UAE is, for instance, China’s most important trade partner in the region and represents one-third of the total non-oil trade between China and the Middle East. China is also Egypt’s first trade partner while Chinese investments increased ten times since 2015 to reach $1 billion in 2019.

China then managed to assert itself as a providential country in a very decisive timeframe. As the Sinopharm vaccine showed a great 86 percent efficiency rate against Covid-19 infections during the trials in the UAE and Bahrain, China agreed to locally manufacture its vaccine in the UAE with a targeted production capacity of 75 to 100 million doses annually. Egypt will also receive 40 million doses and should implement a manufacturing center locally, while Morocco secured 41 million doses and plans to establish a local production line as well. Although the amounts remain unconfirmed, the region should accept the delivery of dozens of millions of doses, while the first shipments already arrived in Jordan, Bahrain, and Iraq.

In that way, China managed to turn the Covid-19 crisis from a public relations disaster into an opportunity to arise as an international benefactor. In this context, China succeeded to enhance its strategic commitments to its primary Middle Eastern partners by offering a viable solution to the pandemic. This opens the door to further bilateral cooperation within a wider framework in diversified sectors such as science and technology. Consequently, the efficiency of the Sinopharm vaccine will likely enhance a trustworthy relationship towards China’s ability to become a tier-one technological power at the expense of the United States. Besides, China ousted any chances of strains on its local vaccination campaign as it has secured a viable and massive production hub through the UAE, Egypt, and Morocco that can guarantee a sufficient regional production output to fulfill its commitments towards the Middle East.

By contrast, the United States does not seem to be in a position to respond to this Chinese proactive vaccine campaign in the Middle East. The absence of vaccine diplomacy arises, at least in part, ideologically by the market-driven nature of the American economy. The chances for the United States to play a part in the vaccine distribution in the Middle East was also nullified by the Trump administration’s unilateralist stance by favoring an exclusive local vaccination process. This impediment to addressing the crisis internationally was also exacerbated by the administration’s inability to grapple with the pandemic domestically. This protectionist standpoint was illustrated by the U.S. refusal last October to join the Covid-19 Vaccines Global Access Facility, also known as Covax. This global initiative endeavors to speed up the production and distribution of the vaccine worldwide, specifically to poorer countries.

In that respect, the doses distributed by the American Pfizer to Middle Eastern countries are insignificant to have an appreciable impact on the sanitary situation. Except for Israel, the total amount of reserved doses for the region barely reaches 25 million: 1.5 million for Iraq, 1 million for Jordan, 1 million for Kuwait, 2.1 million for Lebanon, and 370,000 for Oman. Egypt has reportedly reserved 20 million doses but deliveries are not yet excepted so far. Saudi Arabia and Qatar decided to order the Pfizer vaccine as well, however, the delivery of several shipments was rescheduled multiple times due to delays in production. Israel eventually managed to secure enough doses from Pfizer to vaccinate its population in exchange for clinical data. After having administered the vaccine to 46 percent of its 9 million people, Israel finds it very effective at preventing the virus transmission. Besides, Pfizer announced that the company managed to reduce the ultra-cold storage requirements from minus 70 to minus 15. There is however still a high uncertainty that Middle Eastern countries will be able to preserve a resilient logistical supply as safeguarding the cold chain will be extremely difficult especially during the summer. Although this issue seems to have no impact on the vaccine’s attractiveness, there might result in serious consequences in the vaccination campaign this year.

For his part, President Joe Biden must focus on handling the vaccine policy domestically considering the deteriorating health situation and the political considerations. This implies that Washington is unable to deploy wide-scale vaccine diplomacy. Nevertheless, the United States has the domestic and multilateral instruments to offset China’s proactive policy. First of all, President Biden demonstrated his confidence in the Covax program by pledging $4 billion to the initiative last week. By stepping up the distribution of the vaccines worldwide, the United States will thus wane the Chinese scope to roll out its vaccine on the international stage. Tunisia, Lebanon, and the Palestinian Authority are the first to receive free doses in the Middle East while Algeria, Jordan, Libya, and Iraq are already registered to the scheme. Secondly, the current administration has the ability to give a degree of latitude for the private sector to distribute more doses internationally as the United States has substantial domestic vaccine production capacities, more than twice those of China (4.7 vs. 1.90 billion doses).

Eventually, the situation is broadly in favor of China that takes advantage of the United States’ political and economic outlook. The recent developments have demonstrated that Middle Eastern political leaders share a belief in the benefits of deeper cooperation with the Chinese government, even though this cooperation is not expected to be a substitute to their strategic relationship with the United States. Ultimately, China’s “vaccine diplomacy” might achieve successful outcomes, but it will not threaten the existing U.S. strategic dominance in the region.