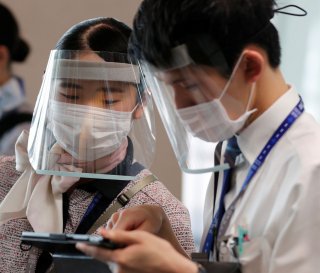 Last week, the English-language Japanese newspaper Asahi Shimbun reported on a study out of Japan which questioned the efficacy of wearing cloth face masks to combat the coronavirus.

The story, which carried the headline “Cloth Face Masks Offer Zero Shield Against Virus, a Study Shows,” summarized the conclusions of a study by Kazunari Onishi, an associate professor at St. Luke’s International University in Tokyo. Onishi, according to the newspaper, “found that cloth masks had a 100-percent leakage rate in terms of airborne particles penetrating the fabric and through the gap between masks and faces, substantially raising the risk of infection.”

The study looked at several types of masks and measured their “leakage rates.” It doesn’t appear that the study has been published in English, nor is it clear whether it has been peer-reviewed.

However, not only does the study go against the established consensus of scientists and doctors, but the author also conceded, per the article, that “such masks do prevent the wearer from spreading droplets by coughing, and also help to stop people touching their noses and mouths directly with their hands contaminated with viruses.” That would appear to contradict the conclusion that masks offer “zero shield.”

Ironically, Dr. Kazunari Onishi, at the same university, also authored a book published in February called “The Dignity of Masks.” According to the university website, “Dr. Onishi wrote this book with hope that people can select the proper medical face masks and wear it correctly based on the accurate knowledge.”

Other studies have concluded that masks are, in fact, effective. An April manuscript, authored by nineteen separate researchers, concluded that widespread mask usage is, in fact, recommended.

Moreover, that manuscript also stated firmly that “The available evidence suggests that near-universal adoption of non-medical masks when out in public, in combination with complementary public health measures could successfully reduce effective-R to below 1.0, thereby stopping community spread. Economic analysis suggests that the impact of mask wearing could be thousands of U.S. dollars saved per person per mask.”