Concerns Remain Even Though Omicron Variant Appears to Be Milder 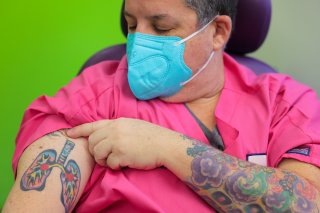 Health officials remain on high alert despite several recent studies are suggesting that the new and highly mutated Omicron coronavirus variant has a lower hospitalization risk and is milder compared to other variants.

Data gathered from a new study in South Africa, published by the country’s National Institute for Communicable Diseases, have shown that people infected with the variant are 80 percent less likely to be admitted to a hospital when compared to other strains.

Moreover, new studies from Scotland and England appear to be supporting the findings from South Africa, which saw the first case of Omicron about a month ago. Researchers are seeing that Omicron is two-thirds less likely to result in hospitalization when compared to the Delta variant, according to the Scottish data. The research mentioned that booster doses can offer great benefit.

“Whilst offering the greatest protection against Delta, the third/booster dose of vaccination offers substantial additional protection against the risk of symptomatic COVID-19 for Omicron when compared to (greater than or equal to) 25 weeks post second vaccine dose,” according to the study.

A separate study out of England reveals that the risk of needing to stay in a hospital for patients infected with Omicron is 40 to 45 percent lower when compared to Delta. It also found that an Omicron infection is 15 to 20 percent less likely to lead to hospitalization.

Despite such positive data, some medical experts are asserting that it is still too early to definitively say whether Omicron is less dangerous.

“This is good news. However, we must wait to see what happens in our own population, which has its own demographic considerations,” White House chief medical advisor Dr. Anthony Fauci noted during a briefing on the virus on Wednesday.

“I would point out that even if you have a diminution in severity, if you have a much larger number of individual cases, the fact that you have so many more cases might actually obviate the effect of it being less severe,” he continued.

Fauci acknowledged that if Omicron proves to be less severe, then it could potentially signal a welcome development in the nearly two-year-long pandemic as millions could emerge with a degree of so-called “natural immunity.”

Meanwhile, Dr. Bruce Farber, chief of infectious diseases at New Hyde Park, New York-based hospital network Northwell Health, recently told CNBC that the “best-case scenario” would be to have a highly contagious but less deadly variant that could help propel some level of baseline immunity in the U.S. population.