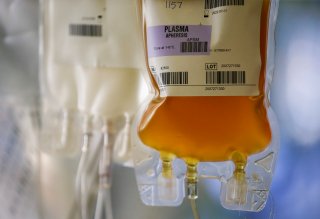 The Omicron variant of coronavirus, by all indications, is less deadly than previous versions of the virus. But in some cases, patients diagnosed with the virus are likely to require hospitalization and medical treatment.

A new study says that one of the methods of treatment used so far in the pandemic has some effectiveness against illness- even that caused by the Omicron variant.

Johns Hopkins Medicine announced on Thursday that an early study has shown that convalescent plasma may help patients to avoid hospitalization with the coronavirus. The plasma has been used as a treatment of patients with the coronavirus since last year. The study notes that the therapy “keeps up with SARS-CoV-2 variants,” including Delta and Omicron.

Convalescent plasma entails using antibody-rich plasma from patients who have recovered from the virus. The therapy is available for usage under emergency use authorization from the FDA.

The pre-print study, conducted by Johns Hopkins Medicine and the Johns Hopkins Bloomberg School of Public Health, shows “solid evidence for the use of plasma from convalescent patients,” as an early treatment for infections with the new variant. It has not yet been peer-reviewed.

“As the changing, often unpredictable landscape of the COVID-19 pandemic demands multiple treatment options—especially in low- and middle-income nations where frontline therapies, such as vaccines and monoclonal antibodies, may not be readily available—our study provides solid evidence that antibody-rich convalescent plasma should be part of the outpatient arsenal,” study co-lead author Dr. David Sullivan said in a press statement issued by Johns Hopkins.

A different study from the National Institutes of Health (NIH) found “no significant benefit” from convalescent plasma. The study was published in the New England Journal of Medicine in August.

“We were hoping that the use of COVID-19 convalescent plasma would achieve at least a 10% reduction in disease progression in this group, but instead the reduction we observed was less than 2%,” the author of the NIH study said.

Also, this week the FDA provided emergency use authorizations to a pair of treatments for the coronavirus: Pfizer's oral drug, Paxlovid, and Merck’s molnupiravir, per NBC News. The new drugs may help those already diagnosed with the virus, although the supply of both drugs will be limited for at least the next few months.

“According to Pfizer, the complex chemistry involved in creating the active ingredient in the pill means production takes about six to eight months,” Jeff Zients, the White House Covid-19 response coordinator, said, according to NBC News. The government does plan to send sixty-five thousand courses of the Pfizer pills to states by the end of the year.