The Coronavirus Can Invade Your Brain Via Nose 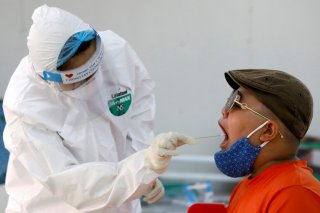 The coronavirus has been shown to have the ability to reach the human brain after being inhaled through a person’s nose, according to a new study out of Germany.

The researchers from Charité – Universitätsmedizin Berlin were able to analyze post-mortem tissue samples from thirty-three coronavirus-positive patients, and what they eventually found was that SARS-CoV-2 can enter the brain via nerve cells in the olfactory mucosa located in the upper part of the nasal cavity.

“It is important to emphasize, however, that [coronavirus] patients involved in this study had what would be defined as severe disease, belonging to that small group of patients in whom the disease proves fatal. It is not necessarily possible, therefore, to transfer the results of our study to cases with mild or moderate disease.”

The research, published in Nature Neuroscience, added that more than one in three patients reported neurological symptoms, while other individuals suffered from headaches, fatigue, dizziness, and nausea. In rare instances, strokes or other serious conditions were observed.

In addition to finding evidence of activated immune cells in the brain and within the olfactory mucosa, the team detected the immune signatures of these particular cells in the cerebral fluid.

“In our eyes, the presence of SARS-CoV-2 in nerve cells of the olfactory mucosa provides good explanation for the neurologic symptoms found in COVID-19 patients, such as a loss of the sense of smell or taste,” Heppner said.

“We also found SARS-CoV-2 in areas of the brain which control vital functions, such as breathing. It cannot be ruled out that, in patients with severe COVID-19, presence of the virus in these areas of the brain will have an exacerbating impact on respiratory function, adding to breathing problems due to SARS-CoV-2 infection of the lungs. Similar problems might arise in relation to cardiovascular function.”

The findings are consistent with another study in September that was conducted by researchers from Yale University. They also discovered that the novel coronavirus was able to enter brain cells, which helped explain the neurological symptoms some patients experienced.

Once in the organ, the virus can take over brain cells in order to make copies of itself. The contagion also appears to deprive nearby cells of oxygen, causing them to wither and die.