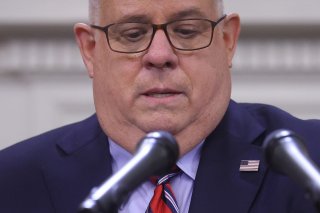 Maryland Gov. Larry Hogan (R) announced the state will not proceed to Phase Three of reopening plans due to increased rates of the coronavirus in recent weeks.

“We do find ourselves at a fork in the road, a critical turning point where we could either continue making progress and continue heading in the right direction or we could ignore the warnings and spike back up like much of the rest of the country,” Hogan said Wednesday at a press conference. “We’re making every effort to keep Maryland safely open for business.”

The governor noted that Maryland will not enter the next phase of the Roadmap to Recovery plan “until it is safe, prudent and thoroughly backed by the data and medical science.” Despite delaying Phase Three, Hogan said he will not force certain businesses to re-close as that measure been “devastating” to other states.

“We’ve come too far together to lose the progress that we’ve made on the road to recovery here in Maryland,” he said.

“This expansion of the masking order is an action that is both fact-based, apolitical and solidly grounded in science,” Hogan said. “And while it can be an inconvenience — especially in the heat — wearing a mask is the single best mitigation strategy that we have to fight the virus.”

At the press conference, the governor issued a travel advisory to a number of high-risk states including Florida, Texas, Georgia, Louisiana, Arizona, Alabama, South Carolina, Nebraska and Idaho, encouraging travelers to postpone or cancel plans to these states until the virus has become tamer.

Though Maryland's initiatives to contact trace COVID-19 patients, the governor noted that one of the main causes of getting the virus is from family gatherings.

“For most of us, I think there’s a false sense of security when you’re spending time with family or friends — especially if you’re at home or you’re at a backyard barbecue. I’m guilty of this myself. I think it’s very easy to feel comfortable thinking that just because you haven’t gone out to what we’ve thought of as a high-risk activity that you’re perfectly safe,” he said.

“I know I’ve been very careful — keeping the mask on back and forth from home to work, going nowhere. But, even I am guilty of this: I had my daughters and sons-in-law and four grandkids sitting in a room, watching movies with the kids, eating popcorn, hanging out, eating dinner. Not thinking that, y’know, my granddaughter’s going to camp, that daughters and sons-in-law are going to work, and we could have been spreading the virus,” Hogan said.

As of Thursday, Maryland has nearly 90,000 confirmed coronavirus cases with over 3,300 deaths. Prince George’s County accounts for more than 25 percent of all cases in the state.