Coronavirus Chaos: With New Variants, What Does ‘Fully Vaccinated’ Mean? 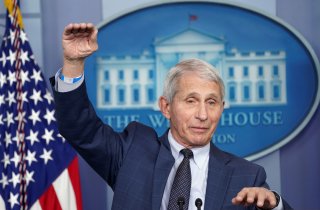 Americans who have completed their two-dose regimen of either the Pfizer or Moderna vaccine or one dose of the Johnson & Johnson vaccine might eventually be considered no longer fully vaccinated, according to White House chief medical advisor Dr. Anthony Fauci.

Such a redefinition of what it means to be fully vaccinated against coronavirus and the variants Delta and the fast-spreading, highly mutated Omicron is certainly “on the table,” the director of the National Institute of Allergy and Infectious Diseases told CNBC on Friday.

“There’s no doubt that optimum vaccination is with a booster,” he said.

“Whether or not the CDC (Centers for Disease Control and Prevention) is going to change that, it certainly is on the table and open for discussion. I’m not sure exactly when that will happen. But I think people should not lose sight of the message that there’s no doubt if you want to be optimally protected, you should get your booster,” he continued.

Fauci also said earlier this week that the currently available coronavirus booster shots have been shown to work well against Omicron and that a variant-specific shot won’t likely be needed.

“Our booster vaccine regimens work against Omicron,” he said during a White House COVID briefing on Wednesday. “At this point, there is no need for a variant-specific booster.”

It was just last week when Pfizer CEO Albert Bourla contended that Americans might need a fourth shot sooner than expected due to Omicron, which was first detected in southern Africa three weeks ago.

He noted that preliminary research by Pfizer and BioNTech revealed that the variant has the potential to undermine protective antibodies generated by their vaccine. However, the two-dose series still offers enough protection against severe illness.

“When we see real-world data, will determine if the omicron is well covered by the third dose and for how long,” he told CNBC. “And the second point, I think we will need a fourth dose.”

Bourla added that one of the top priorities should be to quickly roll out the third doses of the vaccine for the winter season, during which a spike in COVID infections is feared due to people gathering more indoors. “A third dose will give very good protection I believe,” he said.

Meanwhile, on Friday, Dr. Scott Gottlieb, the former commissioner of the Food and Drug Administration, acknowledged that it may soon be more difficult to land an appointment to get a booster shot.

“We know Omicron moves very quickly … this variant is going to move much more quickly through the country than Delta did, so people who are waiting to get a booster to afford themselves a measure of protection against this variant—time is running out to do that,” he told CNBC.

“Appointments are going to fill up, demand’s going to surge. The best way to protect yourself is a booster shot,” he added.