Coronavirus: China Shows Any Hope of America Going Back To Economic 'Normal' Won't Be Easy 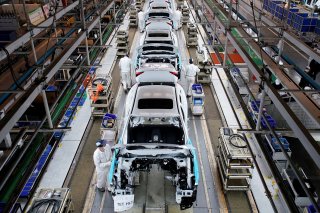 The question on the lips of many Americans, as the coronavirus shutdowns continue, is when exactly this will all be over. And one indication of the answer to that question is what's happening in China.

According to a new analyst note, there are lessons, albeit incomplete ones, for the U.S. to take from what's going on in China, where the coronavirus struck earlier and the recovery began more quickly.

The note is by Avalon Investment and Advisory chief economist and The National Interest contributor Samuel Rines, and Rines says that while "the fog remains thick… there are some guideposts to understanding the potential dynamics of a US reopening."

The note makes several observations about the conditions of the Chinese market. Larger businesses are coming online faster than medium-sized and smaller ones, and hiring more as well. That's a lesson, the note says, that the U.S. could stand to learn, although the effect on small business domestically may be blunted by the CARES Act and other government actions.

The note also states that while people in China are beginning to return to work, the country's economy remains far from "normal."

Many observers are closely watching the supply chain in China specifically to see what the implications are for this year's line of iPhones. Apple's smartphones usually arrive in the fall, bu there's been much speculation in recent months that coronavirus could lead to a delay in the arrival of the product, possibly into the holiday season or even to 2021.

In the latest note Wednesday from Daniel Ives of Wedbush Securities, sources in Asia say demand for iPhones worldwide is expected to significantly decrease, due to the pandemic. However, Ives sees the iPhones arriving in the later part of this year.

"We continue to believe there are 4 models being discussed for iPhone 12 with a mix of 4G/5G that will likely be launched between the October and early December timeframe ahead of holiday season," Ives writes.