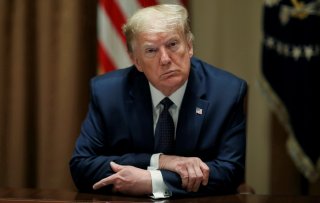 America faces an unprecedented trio of crises that threatens its standing in the world, said David Rothkopf, former editor-in-chief of Foreign Policy and host of the popular podcast Deep State Radio.

“It’s the worst public health crisis the United States has faced in over one hundred years combined with the worst economic crisis since the Great Depression,” he told Joe Cirincione in an interview with the podcast Press The Button.

“We combine those three things and you have a situation unlike any the United States has faced since we emerged as a world power in the early part of the 20th century.”

This is not to say that America was in a golden age before the pandemic hit, cautioned Rothkopf. By a variety of metrics, Washington’s global sway had been trending downward for some time. In a sense, the virus only catalyzed these structural weaknesses - it didn’t cause them.

“Our leadership position has been eroding since the end of the Cold War, primarily because - absent an enemy - the raison d'être for a lot of our alliances faded,” Rothkopf said. “And, frankly, both Republican and Democratic presidents have been unclear about what the successor role for the United States should be.”

Meanwhile, “if you look at U.S. economic power, at the end of World War Two, half of all global trade went through the United States,” he explained. “That’s fallen precipitously over the years.” Conversely, U.S. economic inequality has steadily risen over the past four decades, a trendline only accelerated by the uneven recovery following the Great Recession.

“Since the United States achieved its pinnacle of world power in the late 1940s through the 1960s, we’ve faltered and declined for a variety of reasons,” he continued. “But we are at an inflection point where now it may be very difficult for us ever to regain that. We may be permanently relegated to a great power status as opposed to superpower status.”

Solving, or even mitigating, these problems will require a massive overhaul of the American system and its approach to the world. And it begins at home. “George Kennan, in his famous ‘X Article’ where he talks about the threat posed by the Russians in 1947, ends by saying that the secret to our strength is who we are at home, how we lead by example,” said Rothkopf. “We have to have a functioning democracy. We have to have functioning markets. We can’t leave huge portions of our population behind.”

The pandemic and the resulting economic collapse have revealed the deadly consequences of the conservative vision of a government that cuts social programs while hyperinflating military spending. Taking care of the rich and impoverishing the majority of the population turns out to be a recipe for weakness.

Internationally, Rothkopf called on the United States “to adapt - but not blindly embrace - the principles that we proposed at the end of World War Two.” He singled out the “need to build alliances and find common interests and use those common interests to advance our own national interests.”

“But the difference is whereas the post-World War Two global system focused on a transatlantic alliance and a handful of powers, we [now] have to recognize that the emerging powers of the world are left out,” he explained. “That’s completely inappropriate. We need to have a voice for the rest of the world.”

Asked who would be best suited to make these sweeping changes, Rothkopf replied that the Trump administration was singularly unlikely to do so. But he also cautioned against a Joe Biden administration whose inclination might be to simply restore President Barack Obama’s foreign policy, saying it “is not the direction we need to go.”

“Barack Obama was involved in essentially a retreat of American leadership around the world. He was far too cautious. He made deep mistakes,” Rothkopf explained. He “didn’t get nearly close enough to having a strategic vision for the world.”

“We need to look at the 21st century and create something that is, to take from the Dean Acheson biography title, ‘Present at the Creation 2.0,’” he said. “We need a new vision for a global system that can work to our advantage, and in which we can then resume a leadership role.”

The entire interview with David Rothkopf is available here on Press The Button.