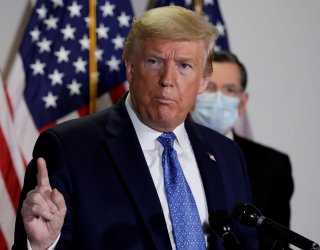 Even Carl Hiassen in his zaniest novels of sleazy, off-beat Florida characters couldn’t make this up. With Florida’s coronavirus cases skyrocketing to over 15,000 a day—more than all but three nations in the world—and over 300,000 cases total, what is to be done?

Let’s reopen Disneyworld and have NBA play in Orlando.

But the tragicomedy gets better, proving satire impossible: in the midst of what Dr. Anthony Fauci, our leading expert on infectious diseases calls a “pandemic of historic proportions,” the President of the United States, downplays the virus which he says, “like magic, will go away,” withdraws from the World Health Organization based on false accusations, and proposes Voodoo miracle cures (drink Lysol, take malaria pills) his own FDA rejects. Yet it doesn’t stop there: for good measure, Trump’s campaign to undermine our public health system now includes a campaign to discredit the Centers for Disease Control, trash Dr. Fauci, and press Congress to cut funding for tests, contact tracing and the CDC.

Yet with coronavirus cases still rising in thirty-seven states and America accounting for 25% of cases globally despite only having 4% of the world’s population, Florida still hasn’t required masks in public places. Much of the world is watching in shocked disbelief and pity, unable to grasp why proven methods—masks, social distancing, contact tracing—that successfully brought the virus under control in Europe and much of Asia, is a source of bitter partisan dispute in the United States.

This White House daily assault on science and the harsh reality of a raging pandemic is so pervasive, so routinely reported by the media, that we are becoming inured to the absurdity of the President’s effort to invent a parallel universe in which all is well and the coronavirus just a like a cold everyone needs to get used to. It is unfair to speculate as to motives. But it may well be that the monumental, bumbling incompetence, pushing responsibility down to the states and localities, and the absence of federal plans to contain the coronavirus crisis, as detailed in a NY Times analysis has left only denial and blame-shifting. It is clear where the buck doesn’t stop.

With such mixed messaging from the highest authorities, Americans may be forgiven for being dubious about the need to wear masks. They challenge the American ethos of “Don’t Tread on Me” individualism and free choice. If the coronavirus is no big deal, why should I compromise my freedom to wear a mask? Thus, the United States has “mask wars.” Basic, proven health protections have become just another issue in America’s tribalized politics. Nowhere else has there been such bitter discord. Social distancing was known in the fourteenth-century: the word Quarantine comes from quaranta, the Italian word for forty—the forty days which sailors returning to the commercial hub of Venice were put in isolation for during the Plague known as the Black Death that killed some fifty million Europeans.

Governors in the South understandably took the view that mask-wearing shouldn’t be forced by the state. Yet, did we hear them constantly explain that as a matter of personal responsibility, to protect yourself and your community, Americans have a social obligation? I certainly didn’t hear that. The Declaration of Independence doesn’t say, life liberty and the pursuit of infecting others. Your freedom stops where mine begins. How did America’s social contract unravel?

Distrust of government has been building for several decades, and now extends to public health officials. Conspiracy theories of the coronavirus as a democratic hoax to get Trump, from the so-called “deep state,” to Bill Gates and George Soros leave your head spinning. Without a common base of facts—a shared reality—democracy is not possible. At the same time, Republicans have voted seventy times to repeal the Affordable Healthcare Act, with no viable replacement. A recent report says that up to 5.4 million workers lost their health coverage.

The mask wars may be a canary in the coal mine, signaling to Americans just how broken and dysfunctional our political system, our divided society, has become. Some fear civil discord not seen since 1860 may be looming.

Democracies are always messy, frustrating and difficult, but when crises occur—Pearl Harbor, the JFK assassination, 9/11, Hurricane Katrina—historically, our society has been galvanized in a concerted response. That has certainly been the case in my lifetime. One would have thought that if anything could bring a fractured nation together, it would be a foreign invasion of a deadly virus, the threat of a pandemic. Yet for reasons I don’t claim to fully understand, instead the pandemic seems to have become yet another source of tribal polarization. This is something worth reflecting on.

At the same time, there are glimmers of hope at the grassroots. The tremendous spontaneous popular outpouring of gratitude to first responders, healthcare workers on the frontlines of the pandemic, to those toiling in markets and factories to keep us going, has been overwhelming. Similarly, the protracted mass demonstrations for racial justice, despite occasionally getting ugly and out of control, together suggest an America that is clamoring for a way out of our current malaise, for a renewal of the American idea.

Winston Churchill is said to have observed that, “Americans always do the right thing—after exhausting all other alternatives.” He was right about the U.S. response to fascism in the 1940s. Perhaps it is an enduring American quality.

The author is a senior fellow of the Brent Scowcroft Center for International Security at the Atlantic Council and its Foresight, Strategy and Risks (FSR) Initiative. He served as a senior advisor to the Asst. Secretary of East Asia and the Pacific (1989-93), Counselor to the UnderSecretary of State for Global Affairs from 2001 to 2004, as a member of the US Department of State Policy Planning Staff from 2004 to 2008, and on the National Intelligence Council (NIC) Strategic Futures Group, 2008-2012 tweet: @RManning4.