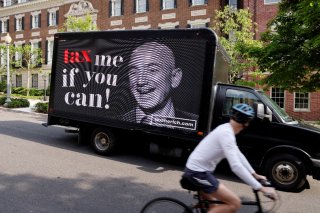 It appears that not everyone has suffered equally amid the nearly two-year-long coronavirus pandemic.

According to Oxfam International’s briefing Inequality Kills, published ahead of the World Economic Forum’s Davos Agenda, the world’s ten richest men more than doubled their wealth from $700 billion to $1.5 trillion during the pandemic—which comes in at a rate of $15,000 per second or $1.3 billion a day.

In addition, a new billionaire was minted every twenty-six hours, further exacerbating economic inequality as the health crisis pushed millions of people worldwide deep into poverty.

“If these ten men were to lose 99.999 percent of their wealth tomorrow, they would still be richer than 99 percent of all the people on this planet,” Oxfam International’s Executive Director Gabriela Bucher noted in a statement.

“They now have six times more wealth than the poorest 3.1 billion people,” she continued.

Tapping into data compiled by Forbes, Oxfam also claimed that the total wealth of billionaires, which include Tesla CEO Elon Musk and Amazon founder Jeff Bezos, surged from $8.6 trillion in March 2020 to $13.8 trillion in November 2021—a larger increase than in the previous fourteen years combined.

“It has never been so important to start righting the violent wrongs of this obscene inequality by clawing back elites’ power and extreme wealth including through taxation—getting that money back into the real economy and to save lives,” Bucher said.

“Billionaires have had a terrific pandemic. Central banks pumped trillions of dollars into financial markets to save the economy, yet much of that has ended up lining the pockets of billionaires riding a stock market boom,” she added.

There was also extreme inequality witnessed in the ongoing fight against the pandemic, contributing to the death of at least more than 20,000 people each day, or one person every four seconds.

“Vaccines were meant to end this pandemic, yet rich governments allowed pharma billionaires and monopolies to cut off the supply to billions of people. The result is that every kind of inequality imaginable risks rising. The predictability of it is sickening. The consequences of it kill,” Bucher said.

“The world’s response to the pandemic has unleashed this economic violence particularly acutely across racialized, marginalized, and gendered lines. As COVID-19 spikes this turns to surges of gender-based violence, even as yet more unpaid care is heaped upon women and girls,” she continued.

In all, women collectively lost $800 billion in earnings in 2020, helping the pandemic set gender parity back from 99 years to 135 years today. Now, 252 men have more wealth than all one billion women and girls in Africa, Latin America, and the Caribbean combined.

“Inequality at such pace and scale is happening by choice, not chance,” Bucher concluded.