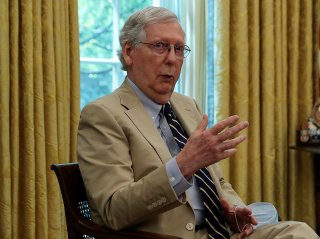 Senate Majority Leader Mitch McConnell (R-Ky.) released a scaled-down GOP coronavirus relief bill on Tuesday and told reporters that the Senate is expected to vote Thursday on the legislation.

"Republicans are taking yet another overture. Today we're releasing a targeted proposal that focuses on several of the most urgent aspects of this crisis, issues where bipartisanship should be especially possible," McConnell said during a Senate floor speech.

The measure needs 60 votes to overcome a Democratic filibuster, but it’s unlikely that the legislation will advance since top Democrats, including House Speaker Nancy Pelosi (D-Calif.), don’t support it.

The GOP bill includes about $500 billion worth of economic relief -- nearly half of what Republicans introduced in July -- that targets unemployment benefits, liability protections for businesses and hospitals, coronavirus testing, schools, the post office and another round of Paycheck Protection Program funding. McConnell didn’t respond to a reporters’ question, however, when asked if he thought the bill would receive all the Senate Republicans total possible votes.

The legislation does include a push by Sen. Ted Cruz (R-Texas) of two years of the tax credits incorporated in his Education Freedom Scholarships and Opportunity Act.

In the past, McConnell noted that up to 20 GOP senators wouldn’t back additional economic relief for the causes of the coronavirus pandemic. Some fiscal conservatives don’t want to add to the growing national deficit, since Congress passed a $2.2 trillion legislation in March.

Bipartisan coronavirus relief talks have been stalled for weeks, especially as Republicans have failed to unite behind GOP-dominated legislation. Lawmakers must collaborate and agree on a bill if they want to avoid a government shutdown in October.

Pelosi and other House Democrats launched their own effort and passed a $3 trillion legislation in May that included nearly $1 trillion in funding for states and cities, but the bill was opposed by President Donald Trump’s administration and Senate Republicans.

In an effort to pump relief into the country, Pelosi and Senate Minority Leader Charles Schumer (D-N.Y.) convened with top White House officials to brainstorm bipartisan legislation, but officials couldn’t reach a compromise.

Pelosi and Schumer said Tuesday that the GOP bill is “headed nowhere” and has “poison pills.”

"Senate Republicans appear dead-set on another bill which doesn’t come close to addressing the problems and is headed nowhere. If anyone doubts McConnell’s true intent is anything but political, just look at the bill. This proposal is laden with poison pills Republicans know Democrats would never support," Pelosi and Schumer said in a joint statement.