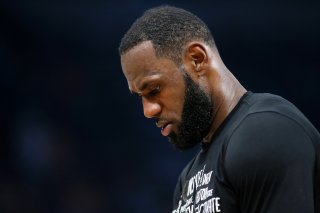 If it were any other year, we would be currently enjoying the NBA and NHL playoffs and the first handful of games of MLB’s regular season.

This, however, isn’t any other year.

Amid this COVID-19 pandemic, the disappearance of sports is expected to wipe out at least $12 billion in revenue and hundreds of thousands of jobs, according to an analysis conducted by ESPN, labor market analytics firm Emsi and Patrick Rishe, director of the sports business program at Washington University in St. Louis.

This grim economic forecast will be even worse, perhaps double, if the NFL and college football seasons don’t get off the sidelines this coming fall. The colossal U.S. sports industry as a whole is worth about $100 billion.

“As an economist, you stand back, you look at the carnage that’s taking place—dumbfounded, awestruck, mind-numbing,” Rishe told ESPN. “All of those phrases, they’re all relevant because we just have never seen anything on this scale.”

Before the coronavirus spread across the country, sports were thought by many to be recession-proof. A 2019 report by PwC predicted healthy annual growth through at least the year 2023. “The love affair with sports in the United States is a perpetual and immersive force,” the report said.

Apparently, that force is finite. More troubling is the fact that the $12 billion estimate might be a tad optimistic, because the analysis relies on certain assumptions that appear more unlikely with each passing day, such as MLB salvaging at least half of its season and the NBA and NHL going ahead with the playoffs without fans in attendance.

The mammoth financial fallout from the stoppage in sports can be partly broken down like this: $3.25 billion is what fans would have spent on pro sports; $371 million from the loss in wages (ticket takers, beer vendors and other stadium and arena employees); $2.2 billion for national TV revenues; and $2.4 billion for tourism-related to youth sports.

Further complicating matters is that insurance will unlikely assist in recouping any of those losses. International events like the Olympics do have comprehensive insurance policies, but major sports leagues in the U.S. are not covered for this particular pandemic.

The sports world understands how big the stakes are if nothing changes by this fall. Each NFL regular-season game is worth nearly $24 million in revenue from TV rights alone, according to the analysis. The 65 college football programs in the Power 5 conferences are responsible for about $4 billion in revenue. In many cases, the money makes up nearly half of the budgets for their athletic departments.

Moreover, from umpires and athletic trainers to dancers and groundskeepers, there are about 3 million jobs within 524 occupations that are dependent on sports, according to Emsi. To make matters worse, analysts noted that many of these employees are living paycheck to paycheck.