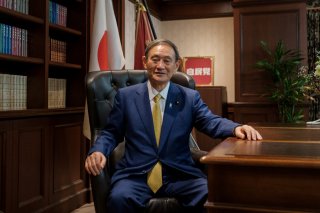 Newly-elected Japanese Prime Minister Yoshihide Suga has announced that he will continue the policies of his predecessor Shinzo Abe. Hopefully this will not include Abe’s approach to the COVID-19 crisis.

Suga would do well to remember that Abe’s approval rates had tumbled this year because, despite relatively few deaths, the public lacked confidence in Abe’s management as the pandemic progressed. A 12 August NHK survey reported that 87 per cent of respondents had anxiety over the possibility of being infected.

The Japanese people are justifiably concerned about COVID-19. They maintain extra social distancing, insist on the highest quality masks and wash hands meticulously. Naturally, this also means high expectations for leaders to do their jobs.

While Australian Prime Minister Scott Morrison, German Chancellor Angela Merkel and most other democratic leaders around the world have enjoyed soaring approval ratings for their handling, few have seen their ratings plunge. US President Donald Trump is of course foremost in this small club, and so too does it include Brazilian President Jair Bolsonaro. It is in this category that Shinzo Abe sits. Immediately after he announced his resignation, his ratings jumped 20 per cent, a remarkable contrast against the polls of 12 August showing 43 per cent LDP supporter and 70 per cent independent voter disapproval.

In crisis, people expect their leaders to be bold, decisive, sincere and accountable. Morrison took bold action and led a united and technocratic national front; New York Governor Andrew Cuomo appealed to his citizens’ better judgment through truth and authenticity. Abe did not deliver. In the eyes of many, Japan’s leadership appeared reactive, invisible and indecisive.

Economic Revitalization Minister Yasutoshi Nishimura was appointed in charge of the pandemic response on 5 March and an emergency bill passed on 13 March, two months after Japan’s first patient. Restricting entry from affected Chinese provinces came too late, as Abe feared compromising the planned visit to Tokyo of Chinese President Xi Jinping. The decision to postpone the Tokyo Olympic Games also came late, on 24 March. And only after seeing a series of lockdowns among global cities, a national emergency was declared far too late, in early April. These decisions should have been early no-brainers, but it was obvious that the leadership saw COVID-19 as an insufficient reason to shut down the economy, and not as a global game changer.

Japan’s relatively low toll during its first wave of infections gave the administration a false sense of confidence. Praising its own ‘Japan model’ made it difficult for leaders to learn any lessons. Limited testing made a complete picture of the pandemic unavailable. Chronic deficiencies in testing capability remains the Achilles’ heel of Japan’s strategy, and windows of opportunity to prepare an in-depth, long-term pandemic strategy remain unseized.

The Japanese leadership failed to orchestrate its bureaucracies and create a united front. Take the Diamond Princess cruise ship fiasco for instance: the health ministry, defence ministry, infectious disease experts and local authorities were all there, but failed to coordinate. Amateurs of the health ministry took the lead while the defence ministry’s experts were sidelined. Then, the emergency bill provided neither superseding emergency power over ministries and agencies to overcome bureaucratic stove-piping, nor encouraged intra-agency collaboration. The response by the public service remains divided and sporadic.

Promoting business and leisure requires first establishing protocols to assure a certain level of safety. But while committing to maintain economic activity, the Abe administration lacked clarity on safety protocols. For travel, many nations require medically certified proof of testing 72 hours before arrival or on arrival. This allows international travellers to safely fly in and out, generating economic activity. Testing capacity for people entering Japan has increased from 2300 a day in July to 10,000, but this is still insufficient. The US$320–US$470 price tag on testing is simply too expensive for the vast majority of Japanese needing to make a trip overseas. Frequent and easy testing could be a routine protocol, as in many countries, for teachers, cashiers and eventgoers to prove safety and give a minimum level of assurance for the nation to bounce back.

Criticism and disappointment is aimed squarely at the Abe administration for falling short of the bar. It is too early to tell if Suga can meet the necessary standard, but he has said that he aims to break up bureaucratic sectionalism and promote reform. The new prime minister has the opportunity to demonstrate badly-needed bold leadership and finally orchestrate a united effort.

Hiromi Murakami is a Visiting Scholar with the Global Health Innovation Policy Program at the National Graduate Institute for Policy Studies (GRIPS), Tokyo.