COVID: CDC Wants You to Think Twice Before Traveling to These 16 Countries 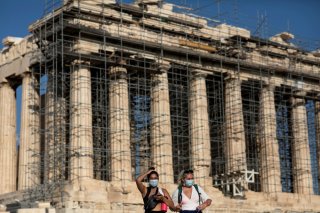 Throughout the pandemic, the Center for Disease Control and Prevention (CDC) has regularly warned against travel to certain countries that have particularly high levels of coronavirus infections and spread.

Now, per CNN, the CDC added 16 countries and territories to its "Level 4: Covid-19 Very High” category, including the popular travel destinations Greece and Ireland.

Americans have also been warned not to travel to Andorra, Curacao, Gibraltar, Guadeloupe, Iran, the Isle of Man, Kazakhstan, Lesotho, Libya, Malta, Martinique, Saint Barthelemy, Saint Martin and the U.S. Virgin Islands. The CDC has also warned against travel to North Korea for the last year.

Reuters reported in early July that Greece had reported a jump in COVID cases after several weeks of decline. The country reported 1,797 new daily cases on July 6, more than twice the day before.

That continued for the next month, per Greek Reporter, with 3,428 total cases reported across the country on August 3.

In addition, the Guardian reported July 30 that Greece had actually sent police to the “party islands” of Mykonos and Ios to help stop the spread of the Delta variant. There were even warnings that Greece could shut down the islands altogether.

“The Delta variant has meant that every country is dealing with the fourth wave now and not as expected in November,” Greek tourism minister Haris Theoharis told the newspaper. “While hotels and family-type venues are implementing protocols diligently, there’s more congestion than we would like to see in bars, especially among the younger crowd ... so we are trying to ensure some balance is kept.”

“There is now a visible danger that the island will be shut down,” citizens’ protection minister Michalis Chrisochidois said after flying to Ios this week. “Fines have already been imposed on enterprises which don’t uphold the law and … police who are very active and combative are being dispatched to apply the law and ensure enforcement of measures.”

Earlier this year, the Aegean islands, also in Greece, had marketed themselves as “COVID-free,” after requiring all visitors to vaccinate, per the same newspaper.

The outbreak, and the U.S. warning, are especially bad for Greece since the country’s economy depends so strongly on tourism, especially in the summer.

In addition, per USA Today, Greece’s entire artistic swimming team dropped out of the Tokyo Olympics due to coronavirus cases.