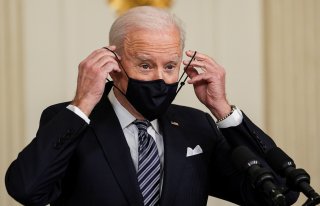 In his July 4 speech, President Joe Biden boldly proclaimed, "Today, we're closer than ever to declaring our independence from a deadly virus. That's not to say the battle against Covid-19 is over. We've got a lot more work to do."

Well, Biden was half right. A lot more work is yet to be done, and as colder weather approaches it seems that "Sheriff Joe" has been unable to be the savior of the nation from the pandemic.

Midwest and New England Cases on the Rise

This week, Michigan reported the highest single-day positivity since the start of the pandemic, with 21,035 new Covid cases; while Minnesota had the nation's worst seven-day rate of new infections.

"The whole Midwest is lighting up," Michael Osterholm, director of the University of Minnesota's Center for Infectious Disease Research and Policy, told The Minneapolis Star Tribune.

The story is similar in New England as Vermont and New Hampshire had seen two of the largest increases in the United States in the past two-week period—respectively rising by sixty percent and fifty-six percent. According to a report from NBC News, which cited data from Dr. Jan Carney, associate dean for public health at the University of Vermont’s Larner College of Medicine, Vermont had recorded some breakthrough infections among the fully vaccinated. However, the current rise in cases has been driven mostly by the spread of the highly contagious Delta variant among the unvaccinated.

Nationwide, hospitalizations remain more common among the unvaccinated, and those individuals are more likely to need intensive care and ventilators for treatment as well, experts warn. At least twenty-eight Texas hospitals reported being out of Intensive Care Unit (ICU) beds last week, according to the latest federal data.

Even as half the country has seen an increase in cases, the other half has continued to see a decline. Yet, there may be troubling signs as well that the trend could be reversed across the nation. After seven weeks of declines in new cases in Kentucky, the state reported that it is hitting a plateau. Democratic Gov. Andy Beshear noted that Kentucky had seen a spike in new cases, but optimistically said was not yet "a reason to think that there is another surge" coming this year.

Most experts would disagree and have predicted that the nation could see a rise as more people are staying indoors, while the Thanksgiving holiday could be another "super spreader" event as more people take to the skies and hit the road to be with loved ones this year.

The continued pandemic and the threat of another "wave" have been especially bad for President Biden's poll numbers. The Washington Post reported on Monday, that America's approval of Biden's handling of the coronavirus pandemic—which had been seen as one of his most positive assets early in his presidency—has continued a downward trend. The recent Post-ABC poll found that forty-seven percent of Americans approve and forty-nine percent disapprove of the president's handling of the pandemic. By contrast, in a June survey, sixty-two percent approved and thirty-one percent disapproved.

It seems Biden was absolutely correct when he said more than four months ago, "We've got a lot more work to do."