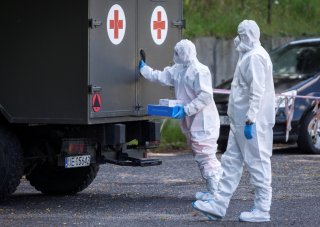 The highly transmissible Delta variant—first detected by scientists in India nearly a year ago—now represents ninety-nine percent of all sequenced coronavirus cases worldwide, according to top officials at the World Health Organization (WHO).

“Delta is really the dominant one,” Maria Van Kerkhove, the WHO’s technical lead on coronavirus, noted during a Q&A streamed on the organization’s social media channels on Tuesday.

“And there are two variants of interest—Mu and Lambda—that we’ve been tracking as well, but again, where Delta is present, Delta takes over,” she continued.

Van Kerkhove’s comments come as Europe is now driving the rising cases globally, with the continent accounting for approximately 60 percent of the 3.3 million new cases registered worldwide last week. More concerning is the fact that caseloads have been climbing across the world for four straight weeks.

“The pandemic is heading in the wrong direction at the moment,” Van Kerkhove said.

While roughly sixty percent of people in Western Europe are fully inoculated against COVID-19, only about half as many are vaccinated in the eastern part of the continent, where there are much higher rates of vaccine hesitancy.

Meanwhile, German chancellor Angela Merkel has described the ongoing pandemic in her country as “dramatic.”

“The fourth wave is hitting our country with full force,” she was quoted as saying by Deutsche Welle at an event for the Association of German Cities.

“The number of daily new infections is higher than ever before … and the daily death toll is also frightening,” she added.

The Robert Koch Institute, Germany’s public health body, reported more than fifty-two thousand cases, along with nearly three hundred deaths, on Wednesday. To date, the country has seen more than five million cases and nearly a hundred thousand deaths, according to the latest data compiled by Johns Hopkins University.

Another country that is being hit hard is the United Kingdom, which tallied a weekly average of more than thirty-eight thousand new cases, a jump of thirteen percent from the previous week. In response, Britain’s COVID-19 booster vaccine rollout is to be extended to individuals aged between forty and forty-nine in a bid to reverse waning immunity in the population ahead of the winter months.

The Netherlands and Austria have decided to reintroduce partial lockdowns, with the unvaccinated not allowed to leave their homes in Austria unless they are purchasing food or going to work. Slovakia is also expected to restrict movements of those who are not vaccinated after a vote on such a measure on Thursday.

In France and Italy, the seven-day averages are showing that caseloads have surged by nearly forty percent.