Democrats’ Reconciliation Package Includes a Lot, But No Stimulus Checks 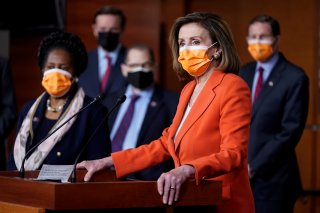 Congress is about to pass the bipartisan infrastructure bill, which means attention will soon turn to the Democrats’ other big spending package this year. This spending package is based in part on President Joe Biden’s proposed American Families Plan, although there are various differences.

The current state of the bill is represented in a document, released Monday by the Democrats on the Senate Budget Committee, and described as “FY2022 Budget Resolution Toplines.”

The proposal includes many things, in four categories: families, climate, infrastructure, and health care. But what it does not include is an additional round of stimulus checks, which had been proposed by many Democrats in Congress as well as outside groups.

The proposals in the bill include universal pre-kindergarten for three-year-old and four-year-old kids, two years of tuition-free community college, an extension of the child tax credit and earned income tax credit, and create a new federal paid family and medical leave benefit.

The bill focuses on infrastructure and jobs too. It aims to invest in “game-changing infrastructure projects and jobs programs” that were not included in the bipartisan infrastructure framework. This includes a “historic level of investments in public housing, green and sustainable housing, housing production and affordability,” as well as “workforce development and job training programs to connect workers to good-paying jobs.”

The bill would improve health care by adding “a new Dental, Vision, and Hearing Benefit to the Medicare program” while extending the expansion of the Affordable Care Act that passed as part of the American Rescue Plan. It will also reduce prescription drug costs.

“The $3.5 trillion Budget Resolution that I am introducing today will allow the Senate to move forward on a reconciliation bill that will be the most consequential piece of legislation for working people, the elderly, the children, the sick and the poor since FDR and the New Deal,” Sen. Bernie Sanders (I-Vt.), the two-time presidential candidate and now Senate Budget Committee chairman said in a social media post on Twitter Monday.

There remains a strong chance that the “toplines” in the document released Monday won’t survive in the final bill, as it will remain subject to negotiation in order to pass. While a reconciliation bill will only need the votes of 50 Senators, which would mean every Democrat, in order to pass, it will need to meet the approval of some senators, including Joe Manchin (D-W.V.) and Kyrsten Sinema (D-Ariz.) who have been skeptical about large amounts of additional spending. It would also need to pass the House, which would require the approval of the vast majority of Democrats.