Democrats and Republicans Agree on One Thing: Coronavirus Mask Mandates 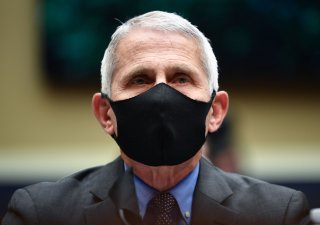 A new poll finds that a bipartisan majority of registered voters favors statewide mask mandates that penalize noncompliance with a fine or even jail time.

Since April, states across America have implemented mask mandates to tame the spread of the coronavirus. States like Texas, Louisiana, Arkansas and Alabama—rising hotspots for the virus—issued executive orders with some exceptions within the last month, after receiving pressure from public health experts and officials.

The poll, conducted by POLITICO/Morning Consult, revealed that 53 percent of registered voters support statewide mask mandates that can be charged with a fine or jail time if people don’t comply with the regulation. About 86 percent of Democrats strongly or somewhat support the state mandates, with 68 percent of independents and 58 percent of Republicans.

“With public health officials putting renewed emphasis on mask-wearing to combat the coronavirus, nearly three-quarters of voters—including over half of Republicans—would support their state instituting a mandatory mask order for public spaces, even if not wearing a mask could result in a fine or jail time,” Kyle Dropp, co-founder and chief research officer at Morning Consult told POLITICO.

Despite the increasing bipartisan support for mask mandates, some governors, including those from Arizona, Georgia and Florida have consistently refused to implement an order. Republican Governor Doug Ducey of Arizona didn’t originally allow local government officials to issue mandates in cities and counties, but recently backed down after receiving a forceful letter from surrounding states’ officials that advocated wearing face masks in public.

After filing a lawsuit against Atlanta’s mayor for issuing a city mask ordinance, Republican Governor Brian Kemp of Georgia encouraged Georgians on Tuesday to wear face masks while in public.

“If Georgians commit to wearing a mask, socially distancing, washing their hands regularly, and following the guidance in our Executive Order and from public health officials, we can make incredible progress in the fight against COVID-19. Together, we can protect our loved ones, revive our economy, and continue to take measured steps forward,” Kemp said in a statement.

President Donald Trump said he will not issue a nationwide mask mandate.

Top U.S. public health experts and officials have recommended for everyone to do their part and wear a mask to limit the spread of the contagion. In March, however, health officials didn’t encourage people to wear masks because they were afraid medical supplies would grow depleted for doctors and nurses.

“I think if we could get everybody to wear a mask right now—I think in four, six, eight weeks we could bring this epidemic under control,” Robert Redfield, director of the Centers for Disease Control and Prevention (CDC), said.

The poll was conducted from July 17-19, with 1,991 nationwide registered voters and the margin of error is plus-or-minus 2 percentage points.