Donald Trump Is Right To Dump the WHO 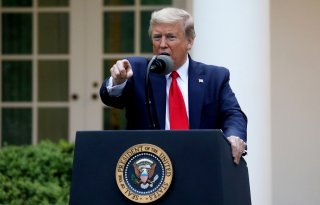 The WHO claims to "courageously and selflessly defend everyone's right to health" with "independent" decisions that are "fair, transparent and timely." Yet as the president pointed out yesterday, "the reality is that the WHO failed to adequately obtain, vet, and share information in a timely and transparent fashion" He added that "the WHO failed in this basic duty and must be held accountable."

Why has the WHO failed so miserably in tackling the coronavirus crisis? The answer is in the acronym. The key problem at the WHO isn't corruption or mismanagement, though the WHO has a terrible track record on both. It's "who" is at the top: director-general Tedros Adhanom.

The WHO is now run by China's man in Geneva, Tedros Adhanom. You might expect an intergovernmental organization with "health" in its name to be led by a medical doctor with a degree from a top medical school. Dr. Tedros has a Ph.D. in community health -- from the University of Nottingham. You might expect the director-general of the world's peak public health body to be a non-political technocrat. Tedros' was Ethiopia's foreign minister before he moved to the WHO.

As Ethiopia's foreign minister from 2012-2016, Tedros presided over a deepening of Ethiopia's special relationship with China. He was already serving in the national cabinet at the opening of the new China-funded headquarters for the African Union in Ethiopia's capital, Addis Ababa, in January 2012. Luckily for him, he left for Geneva before it was revealed that the building was riddled with bugs -- surveillance bugs, that is. The locusts have only arrived now, creating a crisis worse than the coronavirus.

It was during Tedros' term as foreign minister that Addis Ababa became China's aviation hub for the African continent. China financed the construction of the capital's new international airport, which was built by the China Communications Construction Company (CCCC). Instead of pushing Chinese carriers into the African market, China gave Ethiopia's state-owned national carrier control over Africa-China routes, helping it establish itself as a regional African hub airline.

While the United States pours nearly $500 million a year into WHO health programs, China has captured the leadership of the WHO by pouring no-strings-attached aid into Ethiopia. China has given Ethiopia roads, power plants, and even an urban light rail line for Addis Ababa -- all at Chinese expense, and all built by Chinese contractors. And so it comes as no surprise that Ethiopia's former foreign minister praises China's coronavirus response and parrots China's foreign policy agenda now that he is director-general of the WHO.

Tedros is not the first WHO director-general to be beholden to Beijing. Before China had its man in Geneva, it had a woman in Geneva: Dr. Margaret Chan, who served in the office as a Chinese citizen (though also seemingly of Hong Kong and Canadian nationality). When Chan ran for the office in 2006, China's foreign minister told the press that "the central government has placed a high degree of importance on this contest and will make every effort to conduct election work." Combining the Chan and Tedros administrations, China-backed candidates have been in charge of the WHO continuously since 2007.

With the WHO now effectively operating as a propaganda tool of the Communist Party of China, why should the United States continue to fund it?

It is not clear what legal tools the Trump administration has for delaying, reviewing, and potentially redirecting funding that has been budgeted for the WHO. But whatever tools it has, it should use. And the administration's opponents in Congress should not try to score political points by defending an indefensible organization. If they do, they may come to regret it in November.

American taxpayers spend billions to promote better health in the developing world. Much of that money is channeled through intergovernmental organizations like the WHO. When these organizations use American money efficiently and without political interference, the United States can well afford to delegate responsibility (and even cede credit) for the results that are achieved. The United States has always valued results more than appearances.

But when an intergovernmental organization uses American money to promote the interests of a foreign (and potentially hostile) power, it's time to pull the plug.

Today's WHO is not a respected, technocratic health promotion agency. Like so many other United Nations specialized agencies, it has become a corrupt bureaucracy with a political agenda. In the spirit of international harmony, the United States should continue to pay its annual $58 million assessed contribution to the WHO. As for the other $400 million a year or so that the U.S. voluntarily pays to support WHO programs, it would be better spent elsewhere.