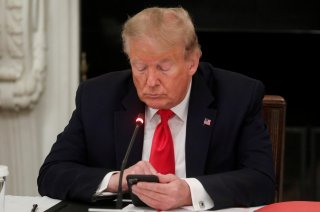 Is President Donald Trump a stone-cold killer, to use one of his favorite phrases? He and vice-president Mike Pence are acting as though the coronavirus has been defeated.

On Wednesday Trump said the virus is “overrated,” “very minuscule,” and “dying out.” He also claimed that people wear masks simply to “signal disapproval of him.” Pence claimed in an op-ed in the Wall Street Journal that there is no real cause for alarm: “We are winning the fight against the invisible enemy," thanks to “the leadership of President Trump.”

No, we aren’t. The virus isn’t on the retreat. It’s on the offensive. And Trump is waving a white flag of surrender.

Over one hundred thousand Americans have died as a result of the coronavirus pandemic. Now the numbers of infected are soaring again. On Wednesday, American health officials reported 27,000 new cases. On Thursday the Florida Health Department reported a record 3,207 cases. The Children’s Hospital of Philadelphia reports, “In fact, Florida has all the makings of the next large epicenter…the risk there is the worst it has ever been in our projections. Miami and Florida’s southeastern counties now join the Tampa/Fort Myers area and Orlando for a fairly widespread transmission event that we forecast will continue throughout the state.” More than 4 million people in Florida are over 65. In Ohio, Gov. Mike DeWine says that there are “worrisome” trends. The state has over 43,000 confirmed cases. Cases are also surging in Texas and Arizona. Is this, as Pence puts it, really “cause for celebration”?

Trump’s insouciance toward the virus is attracting attention abroad. The numbers are going down in Europe and elsewhere. In fact, the Washington Post reports that while the Trump administration has disdained the publicly available research of American scientists, “U.S. researchers’ conclusions informed the actions of foreign governments.” Germany has an older population on average than America but managed to contain confirmed coronavirus deaths to fewer than 9,000.

Indeed, Trump appears intent on fomenting the spread of the virus not only by refusing to don a mask, but also by holding a rally at the BOK Center in Tulsa, Oklahoma that is likely to serve as a superspreader event. Some of his superfans have driven almost 1000 miles to attend his rally and he’s packing in 19,000 of his followers like sardines to bathe in their adulation. He’ll be sufficiently distant to avoid contracting the virus, but they won’t. Small wonder that the event organizers are begging the Trump campaign for specifics about how it plans to mitigate risk. How indeed? Fox News reports, “GOP Chairwoman Ronna McDaniel told Fox News she believed masks would be optional and there has been no apparent social distancing plan or similar system for the indoor event.”

Trump’s approach to the coronavirus reflects incompetence mingled with indifference. It doesn’t represent flawed leadership but a lack of any at all. His coronavirus task force has essentially been rendered inert. It doesn’t meet very often and hasn’t given any press briefings in weeks. Dr. Anthony Fauci says he hasn’t even talked to Trump in weeks.

Put bluntly, Trump’s cheerleading about victory over the virus suggests that he is in effect prepared to condemn tens of thousands of Americans, particularly anyone in their sixties and over, to death. He seems to believe that he can bluster his way out of the coronavirus crisis, that the same magical thinking he has employed in the past will lead to the rosiest of rosy scenarios—a triumphantly resurgent economy that propels him to victory in November.

But he has it backwards. Polls indicate that most Americans are not on board with jeopardizing their own health or that of others in order to reopen the country. What Trump is proposing is as immoral as it is feckless. In refusing to combat the virus, Trump is prolonging the crisis with dire implications not only for public health, but also the economy. For him, the show must always go on. But reopening America prematurely for business could end up permanently shutting down his prospects for a second term.