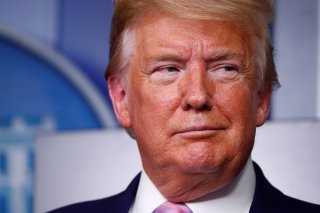 It drew a bit of controversy last year when, following the passage of stimulus checks, the checks themselves were adorned with the signature of President Donald Trump. Some who weren’t fans of the president resented the implication that the president was sending out the checks from his personal funds-especially during a presidential election year. Of course, the same controversy would repeat itself this year, when Trump’s successor, Joe Biden, wrote a letter to stimulus checks recipients, after the passage of the American Rescue Plan, although Biden did not include his own name on the checks themselves.

Now, ABC News is reporting about how the Trump-signed checks came into being, citing internal emails. The report followed a Freedom of Information Act request and even a lawsuit against the Treasury Department to expedite the release of information.

ABC revealed that one early draft showed that then-Secretary of the Treasury Steven Mnuchin’s name appearing on the check alongside Trump’s. ABC also obtained and published images of those checks. The report also said that employees of Treasury “scrambled to generate mock-ups for what the checks would look like.”

“We did put the President’s name on the check. That was my idea. He is the President and I think it’s a terrific symbol to the American public,” the then-Treasury Secretary told CNN in an interview at the time.

The ABC report also shows that the push to put Trump’s name on the checks came just days before the checks were set to go out, and there were even concerns that the checks could be delayed as a result.

"I don't know too much about it, but I understand my name is there," Trump had said at a news conference in the spring of 2020. "I don't know where they're going, how they're going. I do understand it's not delaying anything. And I'm satisfied with that. I don't -- I don't imagine it's a big deal. I'm sure people will be very happy to get a big, fat, beautiful check and my name is on it."