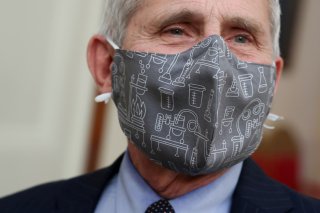 White House Chief Medical Advisor Dr. Anthony Fauci has announced that newly released data suggest that long-term symptoms associated with the coronavirus can linger for up to nine months following the initial infection.

In a White House media briefing Wednesday, the director of the National Institute of Allergy and Infectious Diseases shared the findings of research conducted by the University of Washington, stating that nearly 30 percent of patients reported long-lasting symptoms that included fatigue, sleep disorders, and shortness of breath.

Symptoms of “long COVID,” which researchers are now calling Post-Acute Sequelae of COVID-19, or PASC, have been found to develop long after infection and their severity can range from mild to “incapacitating,” Fauci noted.

“The magnitude of the problem is not fully known,” the nation’s top infectious disease expert said, adding that “long COVID” also has been reported in individuals who did not require hospitalization or those who had symptoms that were not exhibited during their initial infection.

Fauci added that the National Institutes of Health has launched an initiative to study “long COVID” to better identify the causes and potential treatments for those who are dealing with the issue.

There have been relatively few studies that focus on this condition, but one particular research out of China that was published in the medical journal The Lancet revealed that symptoms of coronavirus can linger for up to six months.

The study focused on more than seventeen hundred individuals who were hospitalized with the virus in Wuhan, China, where the contagion was first detected over a year ago. Among those patients, roughly 76 percent exhibited at least one symptom six months after discharge.

“Because COVID-19 is such a new disease, we are only beginning to understand some of its long-term effects on patients’ health,” senior author Dr. Bin Cao, of the China-Japan Friendship Hospital and Capital Medical University, said in a news release.

“Our analysis indicates that most patients continue to live with at least some of the effects of the virus after leaving hospital, and highlights a need for post-discharge care, particularly for those who experience severe infections. Our work also underscores the importance of conducting longer follow-up studies in larger populations in order to understand the full spectrum of effects that COVID-19 can have on people.”

The researchers also discovered that some patients went on to develop kidney problems after being discharged. Lab tests revealed that 13 percent of patients whose kidney function was normal while in the hospital had reduced organ function in follow-up exams.