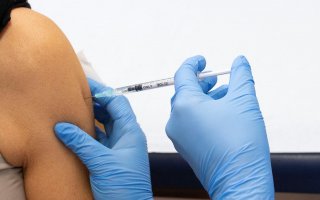 Dr. Scott Gottlieb, the former commissioner of the U.S. Food and Drug Administration (FDA), has stated that U.S. health officials might eventually consider people “fully vaccinated” for coronavirus only if they had their additional booster dose of the vaccine.

“I think at some point they’re going to, but not this year, I think eventually this will be considered the three-dose vaccine, but I would be hard-pressed to believe CDC (Centers for Disease Control and Prevention) is going to make that recommendation any time soon—in part because of this debate about whether or not younger people who are less risk should be receiving that third dose,” he said Sunday during an interview on CBS’ Face the Nation.

Gottlieb, a physician who worked at the FDA under former Presidents Donald Trump and George W. Bush and now serves on the board of coronavirus vaccine maker Pfizer, also claimed that some businesses might soon enforce a three-shot rule.

“I think in cases where entities are going to mandate three doses for people who are six months out from the second dose, they’re doing that because they’re using the vaccine as a way to control transmission and try to end this pandemic,” he said, adding that it is “not inappropriate for businesses to mandate vaccines and certain businesses absolutely should be mandating vaccination in their workplaces.”

Gottlieb, though, did admit that the ongoing battle over vaccine rules has become a “political fight at a national level.”

Meanwhile, White House chief medical advisor Dr. Anthony Fauci contended over the weekend that every vaccinated individual should “get boosted” depending on how long it has been since their initial shots.

“Now that you look at the data as it’s evolved in the United States, it’s very clear,” the director of the National Institute of Allergy and Infectious Diseases said Sunday in an interview with ABC’s This Week.

Health officials “wanted to make sure that the safety signals were right, and once that became very clear, right now I’m very pleased that we’re in a situation where there’s no confusion, there’s no lack of clarity,” he continued.

Fauci did note that currently, fully vaccinated still means an individual has received two doses of the Pfizer and Moderna vaccines or one dose of the Johnson & Johnson vaccine.