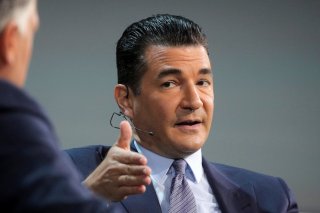 New data are finally indicating that coronavirus-related hospitalizations and deaths are on the decline and that the worst of the Delta variant surge is seemingly over.

However, according to Dr. Scott Gottlieb, the former commissioner of the U.S. Food and Drug Administration (FDA), the United States should take steps now to be better prepared to stop future pandemics in their tracks.

Gottlieb, a physician who worked at the FDA under former Presidents Donald Trump and George W. Bush and now serves on the board of coronavirus vaccine maker Pfizer, looks back at the nation’s early response to the pandemic and presents ideas on how to stop the next one in his new book, Uncontrolled Spread: Why COVID-19 Crushed Us and How We Can Defeat the Next Pandemic.

In a recent interview on Public Radio Tulsa, Gottlieb tried to explain why the United States wasn’t successful in quickly implementing widespread coronavirus testing and mitigating the fallout afterward.

“A big problem was we were playing off of our standard approach to rolling out a diagnostic test in a public health emergency, without recognizing that we were in a fast-moving epidemic where diagnostic testing was going to be essential. …Once the CDC (Centers for Disease Control and prevention) finally had a test designed, we got behind the eight ball early by not having enough testing in place to diagnose the early cases. And by the time we had testing in place, it was too late. The virus was everywhere, and we weren’t going to be able to use testing as a tool to try to contain the spread,” he said.

“Part of the problem is that our pandemic playbook always envisioned that a pandemic would be caused by influenza. And in the setting of influenza, having a diagnostic test widely deployed isn’t as important for one reason—because the incubation period for flu is shorter. Patients come into contact with flu and get sick in a much shorter period of time, and they’re usually not contagious until they’re infectious. So, diagnosing people when they’re asymptomatic and carrying the infection isn’t as important in the setting of controlling a flu as it is for a coronavirus,” he continued.

Gottlieb also touched on the need for a forecasting service that is akin to the National Weather Service, which has the ability to tap into strategic data that could offer early warnings regarding future pandemics.

“The book is my attempt to start to stimulate a discussion about what we need to do to be better prepared and hardened against these contingencies in the future. I think that there’s going to be a more fundamental debate that needs to precede the debate around how we prepare for the next pandemic, and that is the debate around what is the role of public health. I think that in order to be properly prepared for the next pandemic, we’re going to need to empower public health agencies. We’re going to need to build new capacities at CDC and empower them to act in a public health crisis of this magnitude in the future,” he said.

“I think that there’s skepticism of public health right now. And this isn’t just sort of a right-left debate, conservative vs. liberal. I think it’s more pervasive than that. And so, we need to have a fundamental discussion about what the role of public health is,” he concluded.