Economic Fallout: Why Central Asia Is Still Struggling to Survive the Coronavirus 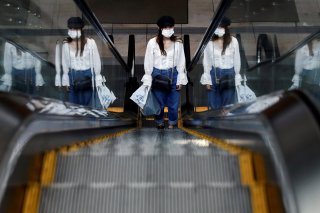 Central Asia’s fossil fuel exporting states have been struck very hard by the economic fallout from the coronavirus. There is a need for a massive infusion of cash to ensure that the domestic energy sectors remain afloat while these countries move along the path of diversifying their economies towards green growth sectors, services, manufacturing, tourism, etc. But if the region’s two largest economies, Kazakhstan and Uzbekistan, experience a serious weakening, the heart of the Eurasian landmass, will likely see a great degree of instability. In addition to international financial institutions helping out regional entities such as the Astana International Financial Center (AIFC) have a key role to play in securing the regional economies and directing investors towards potentially profitable economies.

Thus far, the medical impact of the coronavirus in Central Asia appears to have been contained. The region, however, cannot escape the adverse implications of the resulting global economic downturn. Because the financial well-being of regional states is dependent on commodity prices, Central Asia may be particularly hard-hit. Between a -5.4 percent decline in GDP and a collapse in global demand for crude oil, the five ‘stans are in for a very rough ride.

The region’s largest state, Kazakhstan, very early on kicked into high gear in order to manage the fallout. Aliya Moldabekova, deputy governor of the National Bank of Kazakhstan on April 8 said that the rainy-day reserve fund of $57.5 billion will help the country weather the economic pain caused by the global pandemic. Astana has allocated $10 billion in the fight against the contagion of another $740 million to deal with employment issues. In addition, the Kazakh government is spending $100 per month to the neediest in these most challenging of times.

But even with these measures and fiscal insulation, the Kazakhs remain vulnerable. In early March Energy Minister Nurlan Nogaev said that the government had a plan to deal with the situation arising from crude prices at $40 per barrel and below. It is highly unclear when the lockdown will be lifted and even when it is, oil prices could remain in the $20-$30 per barrel range for the remainder of the year. That said, owing to its relatively stronger economy Kazakhstan is not as vulnerable as are its other Central Asian neighbors.

Central Asian states are either reliant on energy and commodity exports (Kazakhstan, Uzbekistan and Turkmenistan) or foreign remittances (Kyrgyzstan and Tajikistan). So, the threat is not just millions of unemployed people in the region but also a financial weakening of states. Thus, the pandemic situation has created not just social upheaval. Indeed, it has a direct bearing on stability and security in the region.

There is a reason why all major international lending entities have announced assistance programs. Western financial institutions such as the World Bank and the Asian Development Bank are not the only ones offering emergency aid to the Central Asians. The Eurasian Development Bank and the Asian Infrastructure Investment Bank have also announced plans to help. However, the assistance that can be offered, is only a fraction of the medium-terms needs of the ‘Stans—assuming that it could be up to two years before the coronavirus situation is fully brought under control.

As Professor Gregory Gleason rightfully argues foreign cash assistance alone will not cut it and stresses the need for regional solutions. Here is where the AIFC is a potential longer-term solution to the financial woes created by the outbreak. The two-year-old entity is the region’s first state-of-the-art financial center with the goal of sustainable development in Central Asia. As its Governor, Kairat Kelimbetov, has explained, the AIFC is geared towards connecting international investors to promising ventures.

Cognizant of the critical need for dispute resolution mechanisms the Kazakhstan-based Center has employed leading British jurists to head its arbitration tribunal. It is a key step towards attracting international investments through the creation of a business-friendly environment. AIFC is trying to establish a securities market within the region’s largest economy—one that is fully integrated with the global capital markets. The center’s strategic objective is to serve as a hub for investors from both the east and the west to invest not just in Central Asia but also in the broader post-Soviet space.

In the post-coronavirus era, international asset managers are re-evaluating the best places to invest their funds there will be those who will seek the safe havens of treasury bonds of G-7 nations or acquiring shares in the world’s largest firms. But it won’t be long before there is a return to emerging or frontier markets. Here is where AIFC will be critical as it seeks to attract capital from the West as well as East Asia. In this way, it could secure the recovery and transformation of the Central Asian economies and link investors with lucrative growth opportunities.

Dr. Kamran Bokhari is the director of Analytical Development at the Center for Global Policy (CGP). Dr. Bokhari is also a national security and foreign policy specialist at the University of Ottawa’s Professional Development Institute. Bokhari has served as the coordinator for Central Asia Studies at the State Department’s Foreign Service Institute (FSI) in 2019. Follow him on Twitter at @KamranBokhari.