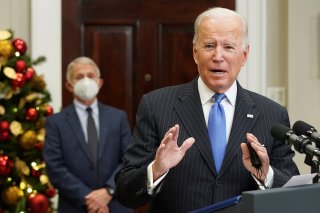 Early reports of the highly mutated omicron coronavirus variant that was first detected in southern Africa two weeks ago were indeed largely frightening and signaled that the nearly two-year-long pandemic fight could be pushed back to square one.

However, the variant, which now has been confirmed in nearly twenty U.S. states and thirty countries on six continents, has been found to be more transmissible but milder than compared to other variants, according to early data gathered by researchers in South Africa.

It is, though, unclear whether those early findings will hold true. For example, it is too early to tell whether it poses a greater risk of death, given the relatively small amount of data and how recently the variant was detected.

“It would not be shocking if that’s true, but I’m not sure we can conclude that yet,” Dr. Emily S. Gurley, an epidemiologist at Johns Hopkins Bloomberg School of Public Health, told the New York Times.

Looking back at the South African data, White House chief medical advisor Dr. Anthony Fauci noted that it was “a bit encouraging.”

“Clearly, in South Africa, omicron has a transmission advantage,” Fauci told CNN over the weekend, adding that “although it’s too early to make any definitive statements about it, thus far it does not look like there’s a great degree of severity to it.”

“But we’ve really got to be careful before we make any determinations that it is less severe, or really doesn’t cause any severe illness comparable to delta, but thus far the signals are a bit encouraging regarding the severity,” Fauci continued.

In a separate report, according to CNN, it is “showing the variant carries a portion of genetic material that’s very similar to segments seen in one of the types of coronaviruses that causes the common colds—one called HCoV-229E. A few researchers said it just might indicate the variant is starting to look more like a nuisance virus than a big killer.”

If this is indeed true, the contagion—as it continues to evolve into a milder form—could be on the same path as other seasonal respiratory viruses.

Some experts, however, are still not letting their guard down, even though a part of the genetic material is similar to the common cold virus.

“Even assuming the insert came from a common cold virus—that’s very dicey—it probably would not make it more like the common cold virus,” virologist Robert Garry, of the Tulane University School of Medicine, told CNN.

Michael Worobey, who heads the department of evolutionary biology at the University of Arizona, added that “the idea that this variant is milder is just pure speculation. There is no reason to think it is.”