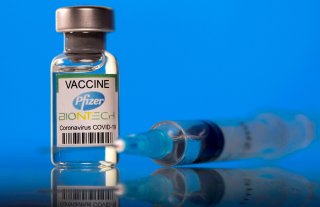 War-torn nations likely won’t succeed in reaching the World Health Organization’s stated goal of giving coronavirus vaccine doses to 70 percent of their populations by mid-2022, Harvard health experts claimed during a conference hosted by the university on Monday.

“There is simply no way that the countries in conflict will reach any of these goals,” Bruderlein said.

Approximately fifty million people live under armed, non-state groups, while another one hundred million individuals live in what are considered volatile areas, according to the Red Cross.

In light of this, Bruderlein pressed the international medical community to reevaluate COVAX, which is a WHO program that tries to improve the production and distribution of vaccines in lower-income countries.

“COVAX aims to provide COVID shots for at least 20 percent of countries’ populations, but Bruderlein said the program was unsustainable due to the logistical difficulties of administering multiple vaccine doses in conflict zones and the lack of long-term outbreak protection offered by just 20 percent vaccination coverage,” CNBC reports.

“Instead, Bruderlein called for health authorities to assess the nations most vulnerable to evolving Covid variants and invest in vaccine rollouts in hopes of immunizing up to 60 percent of their populations against the virus,” according to the report.

Making matters worse is the fact that COVAX is running low on available coronavirus vaccines.

“The COVAX facility, which is distributing vaccines to low-income countries all around the world, is desperately short of doses,” Drexler said. “So really there’s a global equity problem right now.”

Inoculating populations in conflict zones also has proven to be highly difficult. “The protracted nature of conflict generally weakens health systems, and key parts of the health system that are needed for vaccination are rendered dysfunctional,” said Esperanza Martinez, head of the coronavirus crisis team at the Red Cross.

For weeks, the WHO has continued to call for a moratorium on booster doses until at least the end of the year, so that more people from developing countries can have access to the vaccines.

“There has been little change in the global situation … so today I am calling for an extension of the moratorium until at least the end of the year to enable every country to vaccinate at least 40 percent of its population,” WHO Director-General Tedros Adhanom Ghebreyesus said during a recent media briefing.

According to the agency, more than five billion vaccine doses have been administered worldwide but 80 percent have been given to citizens of higher-income countries.