First Confirmed Death from Omicron in the UK 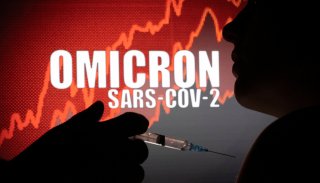 It’s been about two weeks since the Omicron variant was first reported in South Africa, where the discovery of a new coronavirus variant that appeared to spread more quickly than previous ones was enough to send markets into a tailspin in the ensuing days.

On Monday, there were the first reports of an Omicron fatality in the UK. British prime minister Boris Johnson said Monday that at least one person has died from the Omicron variant, according to the BBC. The prime minister made the announcement while visiting a vaccination clinic in London while asking Brits to get a booster shot if they hadn’t already.

The same story said ten people in that country were hospitalized with the Omicron variant of the virus, as the prime minister warned of a “tidal wave” of new infections.

“I’m afraid it is now clear that two doses of vaccine are simply not enough to give the level of protection we all need,” Johnson said in a televised address, per the Associated Press. “But the good news is that our scientists are confident that with a third dose—a booster dose—we can all bring our level of protection back up.”

Also in the UK, an Oxford study on Monday found that the Omicron variant can hit double-vaccinated individuals. The study came from blood samples of people twenty-eight days after their second shot of either the Pfizer or AstraZeneca vaccine, per CNBC. Researchers were, however, optimistic that a booster would “improve immunity against the new, highly transmissible variant.”

“This will likely lead to increased breakthrough infections in previously infected or double vaccinated individuals, which could drive a further wave of infection, although there is currently no evidence of increased potential to cause severe disease, hospitalization or death,” the Oxford researchers said in their report.

“Whilst there is no evidence for increased risk of severe disease, or death, from the virus amongst vaccinated populations, we must remain cautious, as greater case numbers will still place a considerable burden on healthcare systems,” Gavin Screaton, head of Oxford University’s Medical Sciences Division and lead author of that study, said in the release of it.

Meanwhile, the overall coronavirus death toll in the United States has passed the 800,000 mark, according to Reuters. That death toll now exceeds the population of North Dakota, per the news organization. More than 450,000 of those deaths have come in 2021, with the majority of deaths occurring in non-vaccinated patients.

There remains much uncertainty, although there are early indications that the variant is more likely to lead to moderate illnesses, and Pfizer is confident that its vaccine will hold up against Omicron, provided the subject has received a booster as well.

As of Friday, Omicron cases had been reported in twenty-five states and more than fifty countries in the first two weeks. By Monday, that number had reached thirty, in addition to Washington, DC the Washington Post reported.

Last Week, the World Health Organization had stated that there are no conformed fatalities tied to the Omicron variant. This does not mean that no one has died of it, or that the variant is not potentially dangerous. It’s also possible that people had caught the disease from the variant before it was identified.

“Depending on these characteristics, if another major surge of COVID-19 takes place driven by Omicron, consequences may be severe,” the WHO said in its report last week. “Increasing cases, regardless of a change in severity, many pose overwhelming demands on health care systems and may lead to increased morbidity and mortality. . . . The impact on vulnerable populations would be substantial, particularly in countries with low vaccination coverage.”

While WHO described its rate of concern with the new variant as “very high,” it added that evidence contains “considerable uncertainty.”

The director of the CDC, Dr. Rochelle Walensky, told the Associated Press in an interview on Wednesday that of the first forty people in the U.S. to contract the variant, more than three quarters had been vaccinated. She added that the disease was mild in most cases of the first forty people, although most of the first people to get sick were younger people, who might suffer less severe symptoms. Several of them had also traveled to southern Africa or other parts of the world.

“What we generally know is the more mutations a variant has, the higher level you need your immunity to be. . . . We want to make sure we bolster everybody’s immunity,” Walensky said in the interview last week. “And that’s really what motivated the decision to expand our guidance.”