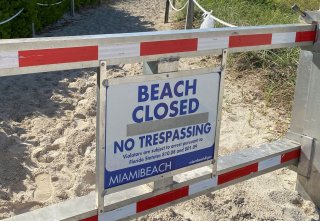 What seemed like a safe place to isolate from coronavirus is now an epicenter with floods of positively tested cases, diminishing medical supplies and overcrowded hospital intensive care units.

Florida has nearly 225,000 cases as of July 9, consuming more than seven percent of America’s reported statistics, according to Johns Hopkins University coronavirus data.

“When you look at some of the most draconian orders that have been issued in some of these states and compare Florida in terms of our hospitalizations ... I mean, you go from D.C., Maryland, New Jersey, New York, Connecticut, Massachusetts, Michigan, Indiana, Ohio, Illinois—you name it—Florida has done better,” Florida Governor Ron DeSantis (R) said when the pandemic struck the northeast during its early stages.

Florida originally seemed like the perfect region to escape from the virus, as professional sports leagues—including the NBA—decided to hold its seasons there. The Republican National Convention also moved from Charlotte to Jacksonville.

Despite Florida remaining in the top five states with the highest number of cases, DeSantis still refuses to impose a statewide mask mandate. If DeSantis put an executive order like this in place, public health experts say that the virus would be more tamed in the Sunshine State.

“There is a significant amount of data that would support that wearing masks reduces the incidences of covid transmissions, and I think that there is little question that imposing social distancing and masks and any of the other steps that scientists around the world have discussed and presented data for would impact the spread of the virus,” Mark Schwartz, biotechnology executive and professor at San Jose State University, told TNI.

“I am committed to supporting our hard-working health care workers and physicians across the state and thank them for their ongoing efforts,” DeSantis tweeted Wednesday.

Schwartz continued to say that DeSantis has to stop “downplaying” the virus and to look closely at the data.

“There is one other thing that I would strongly recommend that he does, and that is stay true and speak science,” Schwartz said.

South Florida, however, does have a mask mandate. This region includes Miami-Dade, Palm Beach, Broward and Monroe counties. Miami-Dade is the sixth-highest county in the U.S. for confirmed cases, with over 50,000.

A number of states that DeSantis bashed in April are now experiencing fewer reported cases per day over the course of the last two weeks, according to Johns Hopkins University data.

Maryland, New Jersey, New York, Connecticut, Massachusetts, Michigan, Washington, D.C. and Illinois have all implemented orders that require people to wear masks when in public. Even though New York still remains in the lead for the number of coronavirus cases with more than 400,000, the state has seen a more manageable amount of cases being reported each day during the last two weeks.

Other states like California, Tennessee, Louisiana, Texas and Georgia have seen spikes in the number of cases.