Fourth Stimulus Check Update: Will You Get One? 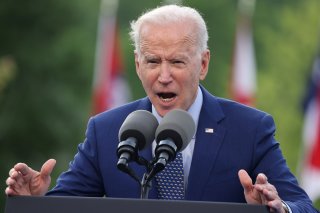 As President Joe Biden addressed a joint session of Congress for the first time on Wednesday, millions of Americans were wondering whether he would resurface talks about a fourth stimulus check. Google searches for “Biden speech stimulus” and “Biden 4th stimulus” spiked as the president delivered remarks.

Americans also received two other stimulus checks over the past year from the previous administration, as Congress tried to pump federal funds into the pockets of families and individuals struggling with the economic crisis caused by the coronavirus pandemic.

But as Biden took centerstage Wednesday night, he only briefly touched upon the stimulus check speculation.

“We kept our commitment and we are sending $1,400 rescue checks to 85 percent of all American households. We’ve already sent more than 160 million checks out the door. It’s making a difference,” he said, adding examples of stories from Americans who said it helped them pay for essentials.

Although Biden touted his rescue package during his speech, he offered no indication that he plans to unveil another bill with additional stimulus payments.

This sentiment contrasts the recent Democratic push on Capitol Hill from congressional leaders who are arguing for a fourth round of direct payments.

More than 50 House Democrats have called on Biden to advocate for recurring payments until the pandemic is over. Rep. Ilhan Omar (D-Minn.) led the effort for recurring checks back in January, urging in a statement to the president with colleagues, “A one-time payment of $2,000 is simply not enough. The American people are counting on us to deliver transformative change, and we need to meet the moment by delivering monthly payments of $2,000.”

Senate Democrats have also joined together in support of a fourth stimulus check, as roughly 21 senators wrote a letter to the president saying, “We urge you to include recurring direct payments and automatic unemployment insurance extensions tied to economic conditions in your Build Back Better long-term economic plan.”

Another stimulus payment could be beneficial for Americans. A recent poll conducted by Impact Genome and The Associated Press-NORC Center for Public Affairs Research discovered that 38 million Americans say they are worse off financially than before the pandemic. For those below the poverty level, 29 percent said they are financially worse off.

The poll also found that 52 percent of participants say they were able to save money for most of the past three months, while 37 broke even and 10 percent said they could not pay bills on time.

The Democratic push for a fourth stimulus check may not be enough to pass in Congress, as GOP lawmakers widely oppose the measure. And with razor-thin majorities in both chambers, it’s unlikely Americans will see another direct payment.