Friendly’s Is the Latest Iconic Chain to Declare Bankruptcy 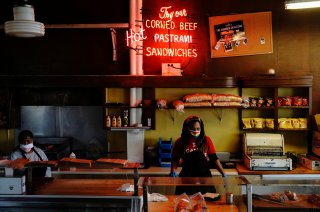 The year 2020 has seen a long list of familiar companies declare bankruptcy, including J.C. Penney, Pier 1 Imports, Brooks Brothers, J. Crew, Lord & Taylor, Century 21, and Modell Sporting Goods. Some of those companies, including Century 21, Lord & Taylor and Modell’s, have been liquidated, while others either have emerged or expect to eventually.

Some restaurant chains have also availed themselves of bankruptcy proceedings this year, including Souplantation and Sweet Tomatoes, Sizzler, Le Pain Quotidien, California Pizza Kitchen, and the parent company of Chuck E. Cheese’s.

Now, the latest restaurant chain to declare bankruptcy is Friendly’s, the chain of diners based in New England with over one hundred locations spread out across the East Coast.

On Monday, the company that owns Friendly’s, FIC Restaurants, Inc., announced that it was entering Chapter 11 bankruptcy, as part of a maneuver to sell the company to an entity called Amici Partners Group, LLC. Amici is described in the press release as “an entity comprised of experienced restaurant investors and operators who have been involved with some of the most well-known QSR and casual dining chains for more than 25 years.”

Amici is also associated with BRIX Holdings, whose website describes it as “a Dallas-based, multi-brand franchising company specializing in foodservice chains with superior products within better-for-you segments.”

The company also said in the release that it will keep the majority of its  130 corporate-owned and franchised locations open, “subject to COVID-19 limitations.” The company has asked a bankruptcy court to hear its case in December, in order to facilitate the sale.

“Over the last two years, Friendly’s has made important strides toward reinvigorating our beloved brand in the face of shifting demographics, increased competition, and rising costs,” George Michel, the chief executive officer of FIC Restaurants, said in the announcement. The maneuver is also expected to save the jobs of all current employees.

“We achieved this by delivering menu innovation, re-energizing marketing, focusing on take-out, catering and third-party delivery, establishing a better overall experience for customers, and working closely with our franchisees and restaurant teams. Unfortunately, like many restaurant businesses, our progress was suddenly interrupted by the catastrophic impact of COVID-19, which caused a decline in revenue as dine-in operations ceased for months and re-opened with limited capacity.”

“Importantly, it is also expected to preserve the jobs of Friendly’s restaurant team members, who are the heart and soul of our enterprise and have been critical to the progress we have made in transforming this iconic brand,” Michel added.

Dating back to the 1930s, Friendly’s had already gone through bankruptcy once, in 2011, although it emerged the following year, having closed more than half of its then four hundred locations.