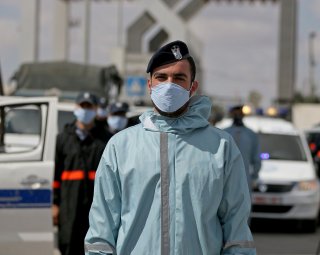 Gaza has declared a full lockdown for forty-eight hours after reporting its first four cases of the novel coronavirus, which were confirmed in a single family in a refugee camp.

Al Jazeera reported that the lockdown is expected to affect the entire Gaza Strip, according to an official from Hamas, the group that governs the territory.

Gaza’s health ministry said the four cases were revealed after a woman traveled to the West Bank, where she tested positive for the virus.

According to the ministry, since the pandemic began, there have been 110 cases of the coronavirus inside border quarantine facilities and one related death.

Health authorities in the territory with a population of two million are highly concerned that the combination of high levels of poverty, dense population, and limited health-care facilities would make it difficult to limit the outbreak.

Both Egypt and Israel, citing security concerns, continue to have tight restrictions at the Gaza border, which have led to shortages of medical supplies in local hospitals in the past.

Last month, Abdelnaser Soboh, the Gaza director of the World Health Organization, said the territory’s health system only has the resources to deal with 500 coronavirus cases at any single time.

“What happens if one of us gets infected?” Khaled Sami, a Gaza resident, told Reuters.

“When people are seriously ill, they send them into Israel, the West Bank or Egypt. Everything is closed now and who is going to open the gate for someone suffering from the coronavirus?”

After the lockdown went into effect, Gaza’s streets were largely deserted, but Reuters reported that some people were still out scrambling to buy groceries at a limited number of stores that had not yet closed their doors.

“I hope the whole world can now help Gaza. We can’t resolve this issue on our own,” another Gaza resident, who asked to be identified only as Abu Ahmed, told Reuters.

Late last week, Israel, which has a population of roughly nine million, passed 100,000 reported coronavirus cases, including about 850 related deaths.

On average, approximately 1,380 people are diagnosed with the contagion per day, a report by the Coronavirus National Information and Knowledge Center said.

In an effort to limit the spread of the virus, the country is currently looking at plans that include new restrictions and partial closures on Rosh Hashanah, Yom Kippur, and Sukkot.

There are now more than 23.7 million confirmed cases of coronavirus worldwide, including at least 814,000 related deaths, according to the latest data from Johns Hopkins University.