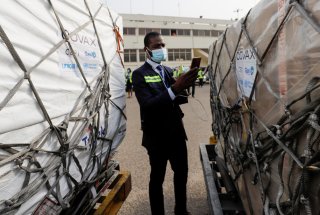 According to Ghana’s Information Ministry, the initial vaccine doses already have been prioritized for frontline medical workers, people over age sixty, and those with preexisting health conditions. The mass vaccination campaign will launch on March 2.

“The government of Ghana remains resolute at ensuring the welfare of all Ghanaians and is making frantic efforts to acquire adequate vaccines to cover the entire population through bilateral and multilateral agencies,” Ghana’s acting Minister of Information Kojo Oppong Nkrumah said in a statement.

According to the latest data compiled by Ghana’s Health Service, the country has recorded more than eighty-one thousand coronavirus cases and five hundred eighty related deaths.

Ghana is among ninety-two low- and middle-income countries that are receiving vaccines for free through COVAX, a global mass vaccination initiative co-led by the World Health Organization, an international vaccine alliance called Gavi, and the Coalition for Epidemic Preparedness Innovations.

Another ninety countries and eight territories have agreed to pay if they choose to receive vaccines via COVAX, which aims to deliver close to two billion doses of COVID-19 vaccines around the world this year.

“Today marks the historic moment for which we have been planning and working so hard. With the first shipment of doses, we can make good on the promise of the COVAX Facility to ensure people from less wealthy countries are not left behind in the race for life-saving vaccines,” UNICEF Executive Director Henrietta Fore said in a joint statement by her agency and the WHO Ghana.

“The next phase in the fight against this disease can begin—the ramping up of the largest immunization campaign in history. Each step on this journey brings us further along the path to recovery for the billions of children and families affected around the world.”

According to the People’s Vaccine Alliance—an organization that includes Amnesty International, Frontline AIDS, Global Justice Now, and Oxfam—about seventy poor countries will only be able to vaccinate 10 percent of their populations by December because wealthier nations, which constitute just 14 percent of the global population, already have secured 53 percent of the world’s supply of the best-performing coronavirus vaccines.