Guns for Coronavirus Vaccines? West Virginia Is Doing It. 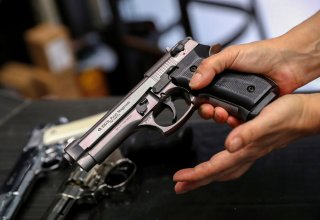 As the United States seeks to end the coronavirus pandemic once and for all, some states have been offering prizes and other incentives to get otherwise reluctant people to get vaccinated. Ohio has a vaccine lottery, called “Vax-a-Million,” which organizers say has succeeded in getting Ohioans to sign up for vaccination. Some other states, including California, Colorado, Arkansas, Delaware and Maryland, have introduced similar schemes to get reluctant people to receive the jab, per Spectrum Local News.

Now, West Virginia is trying something similar, albeit much more unconventional.

Gov. Jim Justice announced Tuesday how it will work. The vaccine lottery will run from June 20 through August 4, and it offers an eclectic mix of prizes.

“The giveaway will include a grand prize of $1.588 million, a second prize of $588,000, full scholarships to any higher education institution in West Virginia, custom-outfitted trucks, weekend vacations at state parks, lifetime hunting and fishing licenses, custom hunting rifles and custom hunting shotguns,” the governor’s website says.

The first prize winners will be announced on June 20, which is both Father’s Day and the anniversary of the state’s founding. To be eligible for the lottery, participants must be residents of West Virginia and have had at least one coronavirus shot. A registration site for the program will soon be set up.

The gun prizes won’t significantly add to the volume of firearms in that state, according to CNN. The prizes include a total of “two new custom outfitted trucks, 25 weekend getaways to state parks, five lifetime hunting and fishing licenses, five custom hunting rifles, and five custom hunting shotguns.”

As for those prizes, they have been somewhat controversial.

“While places like Ohio are offering lottery programs that could actually improve the lives of the people in their state, WV has decided that Injecting more guns into the community is the better public health choice. Trading one epidemic for another,” Taylor Schumann, an anti-gun violence advocate, wrote on Twitter this week. It doesn’t appear that any other state has offered weapons as part of its vaccine incentive structure in the last few months.