Have a Suppressed Immune System? You May Need Another COVID Shot 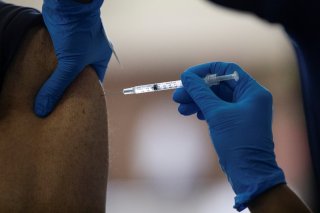 Even before boosters were approved for use by the general public last year, many Americans got third coronavirus vaccine shots, in most cases taking advantage of very little screening of past vaccine status by pharmacists and other vaccine providers. As of last August, more than one million Americans had received unauthorized third shots.

Now that the boosters are approved, and the Omicron wave is infecting vaccinated and boosted people to unprecedented degrees, are people seeking unauthorized additional shots? According to a new report, some are.

The New York Times reported Tuesday that some Americans, especially those with suppressed immune symptoms, have been getting fourth and fifth shots, even though there has yet to be any clinical data showing the effectiveness of additional shots.

Israel’s government recently rolled out fourth shots for some Israelis, including those sixty and over and medical workers, although no other country has moved forward with those.

The Times report added that while doctors have the right to proscribe vaccines as they see fit, they also must sign an agreement promising to go by the rules of the Centers for Disease Control and Prevention (CDC) when it comes to prescribing the vaccines. However, per the Times, “the government has done little to enforce compliance with regulations and seems unlikely to pursue punishments for most providers.” In addition, those who take the extra shots are not doing anything illegal.

The newspaper did talk to some patients who generated no antibodies from their initial shots but have had more success after receiving their unauthorized additional shots.

An alternative to additional shots, per the report, is monoclonal antibodies, although those have been in short supply of late, and there are signs that that treatment is somewhat resistant to the Omicron variant.

The Atlantic had written last month that, as time goes on, additional boosters will likely be needed. It interviewed a man who had received AstraZeneca shots in early trials, realized that that wouldn’t satisfy vaccine mandates, so he got two Moderna shots. This person then received a booster, bringing the total to five, while he also got a COVID infection in the meantime.

“At this point in the pandemic, though, there’s no consensus on the number of shots we’ll need in the long term; plenty of the world’s leading COVID-vaccine experts have shifted their stance in just the past few weeks,” the Atlantic said, adding that even some skeptical about the eventual need for annual boosters now have changed their minds.

The report came as the U.S. reached 1 million coronavirus cases per for the first time since the start of the pandemic. Additionally, some schools have had trouble reopening for the spring semester, often due to staffers and teachers being out with COVID infections.