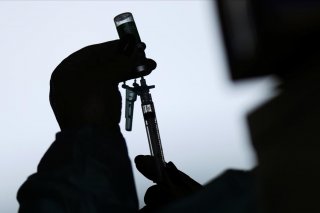 Infectious disease expert Dr. Michael Osterholm has sounded the alarm that the United States will have to confront a new surge in coronavirus cases and deaths related to variants first identified in the United Kingdom, South Africa, and Brazil.

“We are going to see something like we have not seen yet in this country,” the director of the Center for Infectious Disease Research and Policy at the University of Minnesota said Sunday on NBC’s “Meet the Press.”

“Imagine where we’re at … right now: You and I are sitting on this beach where it’s 70 degrees, perfectly blue skies, gentle breeze. But I see that hurricane five, category five or higher, four hundred fifty miles offshore. And telling people to evacuate in that nice blue sky day is gonna be hard. But I can also tell you that hurricane is coming.”

Osterholm, who served on President Joe Biden’s COVID-19 advisory board during the transition, also called for ramping up vaccination campaigns across the country, giving as many people as possible—especially seniors—a single dose of the two-dose vaccines rather than ensuring everyone receives the full two doses on schedule. He suggested, though, that his plan might require some second doses to be delayed.

“The fact is that the surge that is likely to occur with this new variant from England is going to happen in the next six to fourteen weeks. And, if we see that happen, which my forty-five years in the trenches tell me we will, we are going to see something like we have not seen yet in this country,” Osterholm said.

“We still want to get two doses in everyone, but I think right now, in advance of this surge, we need to get as many one doses in as many people over sixty-five as we possibly can to reduce serious illness and deaths that are going to occur in the weeks ahead.”

On Monday, White House coronavirus advisor Dr. Anthony Fauci stressed that Americans should still get vaccinated as soon as they become eligible, even as health experts contend with the emerging variants.

“You need to get vaccinated when it becomes available as quickly and as expeditiously as possible,” the director of the National Institute of Allergy and Infectious Diseases said during a virtual press briefing of the White House COVID-19 response team.

“And the reason for that is . . . viruses cannot mutate if they don’t replicate. And if you stop their replication by vaccinating widely and not giving the virus an open playing field to continue to respond to the pressures that you put on it, you will not get mutations.”

Fauci last week warned that the new variants will eventually outnumber cases of the original strain of the virus in the United States. In particular, the UK mutant virus already has been identified in more than thirty states.

Despite early hiccups, the federal vaccine rollout has gained much-needed momentum in recent weeks. Nearly twenty-six million people have received at least one dose of the vaccine, according to the U.S. Centers for Disease Control and Prevention, and about six million have been inoculated with both doses.