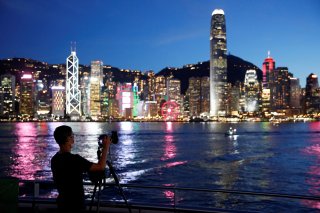 Hong Kong is on the cusp of a “large-scale” coronavirus outbreak that may “collapse” its health-care facilities and cost even more lives, Chief Executive Carrie Lam said on Wednesday.

While grappling with a sharp rise in new coronavirus cases in the region—now regularly registering more than a hundred new daily cases—government officials and health experts have urged people to stay indoors.

A new daily high of 145 confirmed infections was reported this week. Less than a month ago, the average number of new daily cases in Hong Kong was under ten.

The total number of cases is now nearing 3,000.

In a prerecorded video address, Lam said there has been an “upsurge” in local infections, and there are “many with yet unknown sources.”

“We are on the verge of a large-scale community outbreak, which may lead to a collapse of our hospital system and cost lives, especially of the elderly,” she said.

Despite being located relatively close to the Chinese city of Wuhan, where the virus is believed to have originated, Hong Kong was initially able to contain the pandemic.

With such few cases, it was able to avoid any wide-ranging lockdowns—and even reopened Hong Kong Disneyland in mid-June.

Also on Wednesday, more stringent social distancing rules took effect in Hong Kong, with a ban on gatherings of more than two people and the suspension of dine-in services.

Lam called for the cooperation of all citizens.

“Anti-epidemic measures have caused difficulties and inconvenience, but in order to protect our loved ones, our healthcare staff and Hong Kong, I appeal to you to follow strictly the social distancing measures and stay at home as far as possible,” she said.

“If we stand united and work together, we can suppress this epidemic again.”

The new measures also make it mandatory for face masks or coverings to be worn in all public places. It was earlier announced that public spaces like bars, gyms and hair salons would have to shut down.

There are now more than 16.8 million confirmed cases of coronavirus worldwide, including at least 662,000 deaths, according to the latest data from Johns Hopkins University.