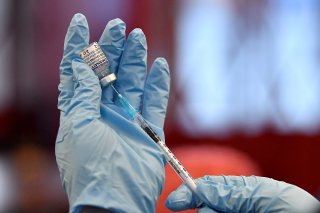 As the new and highly mutated Omicron coronavirus variant continues to spread rapidly in the United States and across the world, hospitals are once again being stretched to the limit.

In fact, it has gotten to a point in which the Mayo Clinic in Rochester, Minnesota, and other hospitals have taken out full-page newspaper ads pleading with the public to wear face masks and coverings and get vaccinated.

“Our emergency departments are overfilled and we have patients in every bed,” the ad continues. “Now an ominous question looms: Will you be able to get care from your local community hospital without delay? Today, that is uncertain.”

This particular variant—first detected in southern Africa about three weeks ago—is known to feature more than thirty mutations to the spike protein, which could be potentially associated with a decrease in antibody protection and much higher transmissibility rates.

It is now circulating in at least thirty-six states and accounts for 3 percent of all coronavirus cases in the country, according to the U.S. Centers for Disease Control and Prevention. In heavily populated states like New York, the variant accounts for more than 10 percent of all cases.

Currently, the United States is reporting approximately 120,000 new cases per day, according to the latest data compiled by Johns Hopkins University. That figure is a sizeable 25 percent jump from before Thanksgiving. Moreover, nearly seventy thousand people are currently hospitalized with the virus.

This all continues to wreak havoc on the nation’s already-stretched hospital systems. Dr. Darryl Elmouchi, the president of Spectrum Health West Michigan, recently told CNBC that the system’s fourteen hospitals have witnessed “far and away the worst surge” in recent months.

“We are absolutely and sadly on track to follow the same but worse this fall,” he said. “We are projecting December deaths to be at absolute peak levels.”

Rising case counts are also overwhelming hospitals in the United Kingdom. Dr. Mike Ryan, the director of the World Health Organization’s health emergencies program, has noted that the Omicron variant is doubling every two days or less in that country. On Wednesday alone, the United Kingdom reported a record number of new daily cases with more than seventy-eight thousand, which marked a massive jump from just the day before when it registered nearly sixty thousand cases.

“The lag between infections and hospitalizations is around two weeks,” said UK Health Secretary Sajid Javid, per The Associated Press.

“With infections rising so quickly, we’re likely to see a substantial rise in hospitalizations before any measures start to have an impact. So, there really is no time to lose,” he added.