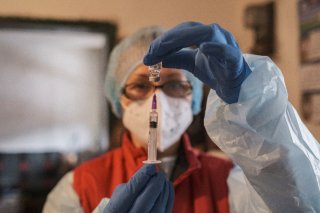 “Are you going to Belgrade for a free vaccine?’’

This is one of the most common questions you can hear these days in Bosnia, Montenegro, and North Macedonia. The region is witnessing a spike in the number of Covid-19 infections and a huge number of deaths. In fact, Bosnia’s capital Sarajevo had, through the latter part of March 2021, the highest number of Covid-19 deaths in Europe per 100,000 citizens. There are no vaccines in sight and the multi-layered postwar Bosnian government has been squabbling in endless tugs of war over whose responsibility it was to procure vaccines. The past months were marred with numerous scandals, public procurement manipulations, and price rigging.

However, while most western Balkan states have barely started their mass vaccinations, Serbia boasts of having not only ample supplies of jabs but one of Europe’s highest per capita vaccination rates—far ahead of most European Union member states.

And now Belgrade is offering free jabs to the region. But why would a rather poor, mostly dilapidated, and indebted country such as Serbia, which carries the burden of orchestrating a genocidal campaign against Bosniak Muslims and Kosovar Albanians in the 1990s, be giving out free vaccines to the region?

It all began in March. Before any western Balkan country had yet received its vaccines, Serbia’s President Aleksandar Vučić personally delivered thousands of doses of AstraZeneca and BioNTech vaccines to North Macedonia and Bosnia and Herzegovina. Though only 10,000 doses were donated to Bosnia and Herzegovina, the message to its majority Bosniak Muslim population against whom it waged a four-year war was perhaps best summarized in a Reuters report “Former enemy Serbia donates COVID-19 vaccines to Bosnia’s Muslims, Croats.” Carefully choreographed videos of Serbia’s president personally donating vaccines went viral in the region.

Realizing the ripple effect this story had in regional and global media, Serbia decided to ride the wave. So towards the end of March, when the Serbian government realized it had 20,000—25,000 doses of AstraZeneca’s vaccines that were nearing their expiration date, they came up with a brilliant plan: offer them to their neighbors who had no vaccines at all. And the neighbors came en masse. Citizens of Bosnia, Montenegro, and North Macedonia—who were rightfully angry with their government for mishandling the pandemic and not procuring vaccines on time, desperately turned to Serbia. Among them were even Bosniak Muslims whose loved ones were killed by Serbian paramilitary groups during the 1992-1995 war. Clearly, in times of such desperation, saving their lives took precedence over past grudges.

So smooth and efficient did it go that over the course of a few days, Serbian doctors inoculated 22,000 foreigners from Bosnia, Montenegro, and North Macedonia. Images of long queues in front of the Belgrade Fair and traffic jams at border crossings with Serbia were widely shared on social media. Even citizens of Croatia, an EU member state, went to Serbia for a free jab, clearly disappointed in the European Union’s sluggish and over-bureaucratic approach to immunization.

Serbia realized that such an act of generosity with its expiring vaccines achieved more in terms of public relations than millions of dollars invested in promoting tourism and cross-border cooperation. So, it decided to continue its practice with Sputnik V, Sinovac, new batches of AstraZeneca, and even Pfizer vaccines being on offer to anyone interested. The online application barely takes thirty seconds—which is a revolutionary step in a post-communist region plagued by paper loads of bureaucracy.

As a former Minister of Information in Slobodan Milošević’s notorious government, President Aleksandar Vučić is a master as spinning stories: “The most important issue is—whether we are able to save people’s lives or not,” he told CNN. “It’s our region, we live next to each other, and if we can be helpful to them, great, and if they can help us, we thank them. That shows we are looking into the future without going to the past,” Vučić added.

Vučić’s vaccine donations to neighboring countries are more symbolic than substantive, but it is symbolism at times of crisis, in a vulnerable region such as the Balkans, that matters. So, while western Balkan states were rapidly gaining a positive image of Serbia overnight, their image of the European Union was deteriorating. Namely, early in 2021, Bosnia, North Macedonia, Montenegro, and Kosovo—eager to demonstrate their Western orientation—refused to order vaccines from China or Russia and instead placed their trust in the EU and World Health Organization supported COVAX system. They even paid in advance for their vaccines. Thus far, these countries received only a handful of vaccines, hardly enough to immunize their medical staff. Serbia took a different approach. It wisely decided to forgo the COVAX mechanism and relied solely on acquiring vaccines directly from Russia and China. In fact, it is now reaping the fruits of its multilateral approach to foreign policy and forging of ties with China, Russia, the United States, and the Arab Gulf states while also making use of generous EU pre-accession grants.

Serbia’s domestic immunization drive with Chinese and Russian vaccines and its neighborhood policy will achieve more than meets the eye.

Locally, the Serbian government’s success at vaccinating not only large segments of its population but also many citizens from neighboring countries has managed to muffle criticism from the Serbian opposition about large infection and death rates from Covid-19 and about Aleksandar Vučić’s semi-authoritarian policies. The success of his Tito-styled multilateral foreign policy is being lauded by many from the region. Serbia’s president is now basking in positive media coverage abroad and boosted standing domestically.

Regionally, pro-European Union countries are now following Serbia’s lead: Bosnia, Montenegro, and North Macedonia—which initially declared they would not buy Russian or Chinese vaccines —have now signed agreements to procure either Sinopharm or Sputnik V vaccines or both. Nearby European Union countries such as Slovakia and Hungary have also approved the use of Chinese Sinopharm and Russian Sputnik V jabs.

Geopolitically, Serbia’s vaccine success story with the help of China and Russia will have strong geopolitical repercussions and are likely to cement a long-term Russian and Chinese presence. A case in point is the announced construction of a factory for producing Sinopharm vaccines in Serbia, funded by China and the United Arab Emirates, which could make it a major vaccine supplier in the region. In terms of public opinion, approval ratings of both countries have skyrocketed. It boosted the image of centralized semi-authoritarian states such as Russia and China, while eroding the image of the European Union which is increasingly seen as impotent and selfish.