How West Virginia Leads the U.S. in Coronavirus Vaccine Rollout 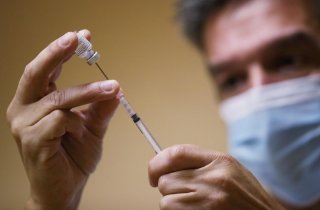 Ever since the federal government began distributing coronavirus vaccines to states more than a month ago, the rollout has bumped into a flurry of logistical hurdles—long lines, jumbled website access, overrun phone lines—slowing the pace of inoculations and crushing nearly all vaccine targets. But one state has been championed for its success in getting people vaccinated, as more than 85 percent of its delivered doses have already been used, according to Centers for Disease Control and Prevention data.

In West Virginia—a mostly rural state with a strikingly unhealthy population—about 10 percent of residents have received the first dose of either the Pfizer-BioNTech or Moderna vaccines as of Monday, which is among the highest in the nation, and more than three percent of the population is fully vaccinated, a major step to combating the deadly disease. West Virginia has administered more second doses per capita than any other state.

As other states struggle to pump even 60 percent of its allotted doses into the arms of residents, West Virginia has crafted its own success story since the early days of the pandemic, as it’s ramped up testing and inoculations in a state home to the greatest share of adults at higher risk of developing a serious case of coronavirus compared to other states across the nation and where 20 percent of West Virginians are 65 or older, an age group that’s suggested to be one of the first in line to get the vaccine—behind health care workers and residents of long-term care facilities—according to CDC vaccine eligibility recommendations.

So, how did West Virginia do it when neighboring states like Maryland and Pennsylvania have more than 40 percent of its doses unused?

One of the earliest decisions that laid the foundation for a successful vaccine rollout, health officials say, was to reject the federal partnership with Walgreens and CVS chains to vaccinate people in nursing homes and other long-term care facilities. Several states across the country activated the federal program, but West Virginian health officials saw little impact it would have in the state, where communities are nestled in rural areas, miles from the closest major pharmaceutical chains. Instead, officials formed partnerships with drugstores that are independently owned, connecting them with about two hundred long-term care facilities across the state.

West Virginia completed its first round of vaccinations in nursing homes in December, after partnering with drugstores, while several states are still struggling to even begin vaccinations for the group.

Small-town owners of the close-knit drugstores say their familiarity with the elderly population has helped build trust in getting vaccinated, which has been a major challenge for other states, as residents and staff of nursing homes and long-term care facilities tend to balk at getting inoculated.

Another part of West Virginia’s vaccine rollout framework is placing the National Guard as a key vaccine responder, serving as the figurehead of operations, as it catalyzed the overall receipt and transport of vials. In recent weeks, other states have considered referring to the National Guard for support.

West Virginian health officials have also partnered with the company, Everbridge, in making a pre-registry system that allows residents to get placed in a vaccination line and wait for an alert about when and where to get inoculated. The program has experienced widespread success—as more than 100,000 people reportedly signed up in the initial days the system launched. The program replaced West Virginia’s first-come, first-served method of waiting in line to get vaccinated, which led to a spate of difficulties since the state was unaware of how many doses it would have to offer each week. Often times, the number of doses received from the federal government was short of what was expected and West Virginian health officials could not meet the inoculation demands.

But supply still acts as a fundamental problem for West Virginia, as well as for the rest of the country.

“It’s not like it’s a cake walk, but we have efficiency,” Dr. Clay Marsh, the state’s coronavirus czar told the New York Times. Marsh added that the state is prepared to pump through 125,000 doses a week but is currently getting enough to vaccinate just 23,600 people each week, a rate that could take nearly five months to finish inoculating residents sixty-five years old and older.

“We can push a lot more,” Marsh said. “We just don’t have anything to push.”

Another barrier that’s interfered in West Virginia’s vaccine strategy is that roughly 40 percent of its residents don’t have access to broadband internet, as several communities are tucked into rural areas where connectivity is hardly an option. Public health officials have launched mobile vaccination vans to reach the isolated parts of the state and encourage people to get the vaccine.

The federal government has pledged to deliver more of both the Pfizer and Moderna vaccines by the end of March, and an additional two hundred million doses of the Moderna by the end of July. The country is also waiting for another vaccine candidate created by Johnson & Johnson that could help speed up the country’s vaccination rollout if it earns Food and Drug Administration approval.