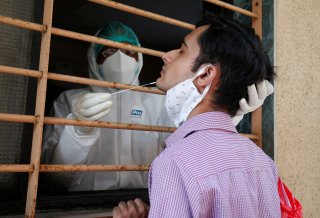 India hit a record spike of newly reported coronavirus cases within the past twenty-four hours, as the country reached 95,735 cases in just one day.

The country’s total number of known cases surged to 4,465,863 on Thursday, according to The Associated Press, marking it the second-highest caseload globally behind the United States, where more than 6.3 million people are reported to have contracted the virus. One of the hardest-hit cities is India’s capital—New Delhi—as it reported 4,618 new cases within the past twenty-four hours and nineteen deaths. Pune, Mumbai and Chennai all saw surges in the number of new coronavirus infections in a single day.

Within the past twenty-four hours, The Health Ministry reported 1,172 fatalities in India, marking the total death toll to be 75,062, which is the third-highest globally, behind the United States with more than 191,000 and Brazil with more than 129,000.

The ministry attributed the spike in new infections to the boosting of daily testing capacity, which has surpassed 1 million. But, experts alerted officials that the coronavirus is extending beyond the borders of the country’s major cities and swarming small villages and towns.

Prior to the surge in cases, India implemented a strict twenty-one-day lockdown in March that contained the virus at a steady speed. The lockdown, as well as the impact from coronavirus, however, forced the economy to contract by a record 23.9 percent in the second quarter. As the economy continued to tank, forcing millions of people unemployed, Indian authorities noted that they had no choice but to reopen.

Although India’s coronavirus case count is upwardly ticking, vaccine trials are still on a stable timeline.

The Serum Institute of India announced a temporary halt to late-stage studies of AstraZeneca’s coronavirus vaccine, but officials maintained that the pause wouldn’t impact the steady timetable for vaccine trials in India. The trials were instructed to hold back in multiple countries following a “suspected serious adverse reaction” in a British receiver.

Indian authorities said they would review and assess the information in the illness report, while also looking into the progress made from the initial human clinical trials.

Serum is producing the vaccine at a rapid rate for middle-income countries, as it’s the world’s largest vaccine producer by volume.