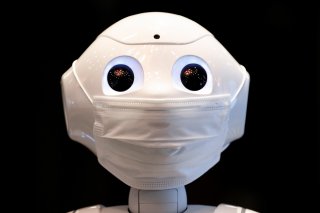 In an effort to lessen the burden on the nation’s medical system, Japan is now using more than 10,000 hotel rooms to accommodate patients with lighter COVID-19 symptoms, in which hospitalization is not needed.

But when these patients arrive at one of these hotels, they won’t experience your more typical greeting—this mundane task is now being handled by a robot.

One hotel is using a well-known robot named “Pepper,” which wears a protective mask like the patients. It can remind people by saying, “Please, wear a mask inside. I hope you recover as quickly as possible.”

Other uplifting messages include: “I pray the spread of the disease is contained as soon as possible” and “Let’s join our hearts and get through this together.”

Pepper, which has been around since 2014, has been deployed to several office buildings across the world to greet visitors. This particular robot features facial recognition software that enables it to identify individuals and even detect emotion via voice patterns and facial expressions.

In addition to Pepper, another hotel is utilizing the services of another high-tech robot, and its chief function is to clean. Armed with the latest AI skills, this robot can clean “red-zone” areas of the hotel that are deemed too risky for the on-site staff to take on.

There is even another robot—called LightStrike—that has recently made waves with its capability to use ultraviolet light to disinfect hospitals. More importantly, it has been shown to neutralize the novel coronavirus in only two minutes, providing a potentially effective method of eliminating the virus from high-risk public areas.

Texas-based Xenex Disinfection Services has already announced a successful test of the robot against COVID-19. LightStrike, which is sold in Japan by the medical equipment maker Terumo, is designed to be able to emit light at wavelengths between 200 and 315 nanometers.

Ultraviolet light has shown to be highly efficient in decontaminating furniture, doorknobs and other often-used surfaces. Just two or three five-minute rounds of ultraviolet light on surfaces can leave viruses too damaged to function.