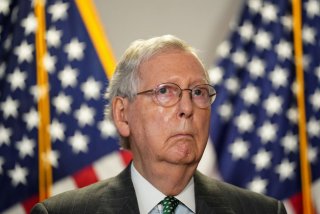 Senate Majority Leader Mitch McConnell highlighted provisions for the next and possibly final coronavirus relief package on Monday, and experts say it must be a thoroughly bipartisan effort in order to pass before Congress’ recess in August.

McConnell said that the legislation will include liability protections, a new round of stimulus checks targeting low-income households, restoring employment numbers, getting schools open in the fall and boosting the health care system.

“I can’t comfortably predict we’re going to come together and pass it unanimously like we did a few months ago,” McConnell said. “The atmosphere has become more political than it was in March, but I think we will do something. The country needs one last boost.”

Other congressmen have echoed McConnell’s concerns, as Republicans and Democrats remain divided on a number of policies that were outlined in previous coronavirus relief packages.

“We’ve got to have that liability waiver coverage for not just businesses, but for schools. The first thing we got to be focused on in this recovery in this next phase of this act is to open the schools. The schools are very concerned about liability, particularly private and public colleges,” Representative Dan Meuser (R-Pa.) said on Fox’s “Varney & Co.”

Two provisions in particular that experts believe to have the most collisions are the $600 per week unemployment bonuses and the creation of a “liability shield” for businesses.

“Democrats would like to continue the $600 per week because then people, some people, stay home and don’t go to work, keep the unemployment numbers up, higher,” Grover Norquist, founder and president of Americans for Tax Reform (ATR), a politically conservative nonprofit organization, said to TNI. Norquist noted that Republicans view the weekly unemployment checks as disincentives to actually return back to work, causing the economy to continue to plummet.

“Democrats don’t want a bill that will make people happier between now and November or more productive, or richer, or more secure in their jobs because that interferes with the project of winning the election. They only come to an agreement if one believes they have the upper hand.”

Norquist added that the two parties will never “agree on what to do,” but instead the Republicans and Democrats should compromise about which political ideals will be embraced on both sides of the spectrum in the fifth coronavirus relief package.

Another provision McConnell highlighted was a five-year “liability shield,” which would provide legal protection to businesses if a customer or employee contracted the coronavirus from the business’ environment. Democrats are hesitant to agree to the terms of the “shield.”

“This one is very important. Senator McConnell declared that without the liability shield, there would be no deal. The question is, is there a way or is there a path to compromise. I think there is,” William A. Galston, author and former policy advisor for President Bill Clinton, told TNI.

Galston suggested that Congress would have to write into law “federal standards” businesses and schools must comply with to receive the proper protection.

McConnell also mentioned another round of stimulus checks with a more strict salary of who receives them.

Democrats have been calling for another round of generous stimulus checks, but creating a cap salary of $40,000 will spark disagreement. While some Republicans agree with McConnell’s emphasis on helping low-income families, much of the GOP is more focused on boosting the economy and getting the unemployment rate down.

The Coronavirus Aid, Relief and Economic Security (CARES) Act that totaled $2 trillion in aid back in March provided monetary payments of $1,200 per individual making a salary of $75,000 per year or less. People making up to $99,000 received a smaller amount.

With benefits from the earlier packages approaching expiration, McConnell estimates the next bill will cost $1 trillion.

Democrats have demanded additional coronavirus legislation as the U.S. has consumed nearly 25 percent of all cases worldwide, with a $3 trillion Health and Economic Recovery Omnibus Emergency Solutions (HEROES) Act passed in the House in May.

“We are facing a crisis the likes of which our nation has never experienced. Our cities and towns are taking on an enormous burden to respond to that crisis and they need urgent relief. I am demanding that Mitch McConnell bring our bill to a vote,” Senator Ed Markey (D-Mass.) tweeted.

At the end of June, House Speaker Nancy Pelosi and Senate Minority Leader Chuck Schumer (D-N.Y.) wrote to McConnell urging him to move forward with negotiations on the fifth coronavirus relief package, despite the two-week recess that started Monday.

“Americans need and deserve bold action now. We have overcome larger problems than the COVID-19 pandemic but not without powerful and effective actions by our government,” they wrote.

“On behalf of the millions of American families who desperately need congressional action, we demand you change your mind and decide to work with us for the good of the country.”