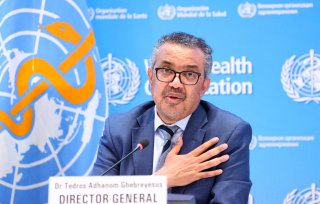 Amid the rapid spread of the monkeypox virus both in the United States and across much of the world, physicians and health officials are scrambling to curb misinformation being shared about the disease.

Officials at the World Health Organization (WHO) have confirmed that the virus itself is not a sexually transmitted infection, but the current outbreak is largely being spread among men who have sex with other men. The global health agency reported late last week that 99 percent of monkeypox patients in Europe are men between the ages of twenty-one and forty, with many of them being sexually active with other men.

According to the Boston Globe, “this has brought back painful memories of the HIV/AIDS outbreak in the 1980s, and fears that the gay community and monkeypox could be similarly stigmatized.”

Dr. Ken Mayer, medical research director of the HIV/AIDS research center at the Fenway Institute, told the newspaper that monkeypox, which is in the same virus family as smallpox but has milder symptoms, is generally spread via extended skin-to-skin contact. Since the outbreak started with men who have sex with men, it has largely stayed among them.

“It’s the social network phenomenon,” he said. “It’s who you’re having contact with, not anything about the specific behavior,” Mayer added.

Adrianna Boulin, director of community engagement and impact at Fenway Health, noted that the impacts of the stigmatization of the gay community during the HIV/AIDS epidemic are still being felt—and some are now expressing concern that history is repeating itself.

Similar sentiments were shared by Dr. Mary Montgomery, an infectious disease expert at Brigham and Women’s Hospital, who added that if the outbreak isn’t contained soon, it will likely spread among everyone.

“It’s a fine line to make sure that those who seem to be at most risk right now are getting the messaging that they need, but not stigmatizing that population, and not giving those that don’t fall into that social network a false sense of relief,” she told the Globe.

Per Reuters, more than 6,000 cases of monkeypox have now been reported in nearly sixty countries. In the United States, there have been at least 560 confirmed cases in thirty-one states and Washington D.C., according to data compiled by the Centers for Disease Control and Prevention (CDC).

On Wednesday, the WHO’s director-general, Tedros Adhanom Ghebreyesus, said that the agency will reconvene a meeting of a committee that will advise on declaring the current outbreak a global health emergency by the week of July 18.

“I continue to be concerned by the scale and spread of the virus across the world,” said Tedros, who noted that the lack of testing in many regions means that there are likely many cases going unreported.