Moderna CEO: It Could Take Months to Develop Omicron-Targeting Vaccine 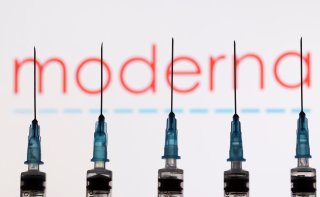 Moderna CEO Stephane Bancel has contended that it will take months to develop and disburse a viable vaccine that specifically targets the omicron coronavirus variant that was first detected in southern Africa last week.

However, a higher dose of the company’s booster shot could be available for the general public much sooner.

“The higher dose could be done right away but it will be months before the omicron-specific variant is ready to ship in massive quantities,” Bancel told CNBC’s Squawk Box on Monday.

“We might decide on the one hand to give a higher dose of the current vaccine around the world to protect people, maybe people at very high risk, the immunocompromised, and the elderly should need a fourth dose,” he said.

Meanwhile, Pfizer CEO Albert Bourla told the same network that the impact of omicron on the company’s two-dose vaccine remains to be seen.

“I don’t think that the result will be the vaccines don’t protect,” he said on Monday. “I think the result could be, which we don’t know yet, the vaccines protect less.”

Bourla did confirm that Pfizer has begun working on manufacturing a new vaccine—just in case one will be needed in the future.

“We have made multiple times clear that we would be able to have the vaccine in less than a hundred days,” he said.

The World Health Organization claimed over the weekend that the omicron variant has more than thirty mutations on the spike protein that binds to human cells. Such mutations have been shown in the past to be associated with higher transmission rates and potentially reduced antibody protection.

“The likelihood of potential further spread of omicron at the global level is high,” the WHO said on Sunday in a preliminary technical brief.

“Omicron has an unprecedented number of spike mutations, some of which are concerning for their potential impact on the trajectory of the pandemic,” according to the technical brief. “If another major surge of COVID-19 takes place driven by omicron, consequences may be severe.”

Meantime, President Joe Biden on Monday confirmed that he is directing federal agencies to be prepared to move as quickly as possible to approve additional vaccines or boosters that target the omicron variant.

“First, this variant is a cause for concern, not a cause for panic,” he said in a speech at the White House.

“We have the best vaccine in the world. The best medicines, the best scientists, and we’re learning more every single day,” Biden said. “And we’ll fight this variant with scientific and knowledgeable actions and speed. Not chaos and confusion.”

The president had already announced that the United States will restrict travelers from South Africa, Botswana, Zimbabwe, Namibia, Lesotho, Eswatini, Mozambique, and Malawi.

“While we have said that travel restrictions can slow the speed of omicron, it cannot prevent it. Here’s what it does—it gives us time,” Biden said.