Moderna Has Good News about Its Booster Against Omicron 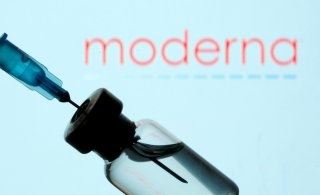 There was a lot of news over the weekend about the Omicron variant of the coronavirus, most of it not very positive.

Cases have been rampaging through the population throughout the United States Dr. Anthony Fauci said on CNN Sunday that the new variant is “going to take over,” and warned of “a tough few weeks to months.”

The World Health Organization (WHO) said Friday that Omicron cases are doubling every 1.5 to 3 days in places where local spread is taking place, Axios reported.

“Omicron is spreading rapidly in countries with high levels of population immunity," WHO said Friday. ”Given current available data, it is likely that Omicron will outpace Delta where community transmission occurs."

Also, two U.S. senators, Sen. Elizabeth Warren (D-MA) and Sen. Cory Booker (D-NJ), both announced over the weekend that they had tested positive for coronavirus. Both senators, who ran for president in 2020, were fully vaccinated with a booster, although both said their symptoms are mild.

Late last week, The University of Texas’ COVID-19 Modeling Consortium published a study, looking at several different scenarios for what might happen with the Omicron variant. In the best-case scenario, “in which Omicron is 50% more transmissible than Delta, but far less immune evasive,” the consortium predicted that the surge will peak in mid-January, with “cases, hospital admissions, and deaths” coming in lower than that of last winter’s surge. The worst-case scenario, however, entailed “the largest healthcare surge to date,” with deaths more than twice those of last winter’s peak. That data, however, is not yet peer-reviewed.

There was one more positive report, on Monday morning. Moderna released some preliminary data about the effectiveness of its booster.

That data is preliminary and has yet to undergo peer review, and it's too early on in the Omicron wave to completely understand its impact. But it was enough to move Moderna’s stock upward on Monday morning.

“The dramatic increase in COVID-19 cases from the Omicron variant is concerning to all. However, these data showing that the currently authorized Moderna COVID-19 booster can boost neutralizing antibody levels 37-fold higher than pre-boost levels are reassuring,” Stéphane Bancel, Chief Executive Officer of Moderna, said in a statement. “To respond to this highly transmissible variant, Moderna will continue to rapidly advance an Omicron-specific booster candidate into clinical testing in case it becomes necessary in the future.”

The other major mRNA vaccine makers, Pfizer and BioNTech, and announced similar results in early studies of their own vaccine and booster, earlier this month.

Those companies also announced that they are at work on an Omicron-specific booster, which they expect to have ready for the market in March. Dr. Fauci, however, said on December 15 that because the boosters are effective, there was “no need” for Omicron-specific shots.

The news is much less good for another of the vaccines, that of Johnson and Johnson (J&J). A preprint study this week, as reported by Axios, found that just one out of 12 people with the J&J vaccine "exhibited neutralizing antibodies,” which was also the case with none of the 11 who received Russia's Sputnik V vaccine. The study also concluded, per Axios, that “the best protection against Omicron appears to come from both having a prior COVID-19 infection and two doses of a Pfizer vaccine.”

The Centers For Disease Control’s Advisory Committee on Immunization Practices, last week, had announced that it was recommending the Pfizer and Moderna vaccines over that of J&J. This wasn’t because of effectiveness against Omicron, but rather because of the fifty-four cases in which the J&J shot led to blood clots, and a rare condition called thrombosis and thrombocytopenia syndrome (TTS.) The vaccine had been pulled for a time back in April, for that reason.