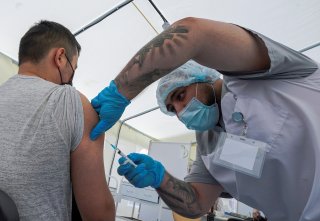 As Russia struggles to maintain an air of normalcy over one year into the global pandemic, the threat of a new coronavirus wave looms over the country’s metropolitan centers.

Reuters’ coronavirus tracker estimates that just under 80,000,000 doses of coronavirus vaccines were administered in Russia. Assuming every person needs two doses, this means that no more than 30 percent of the population is vaccinated according to the latest publicly available data. There have been 6.75 million recorded coronavirus cases in Russia, with an associated death toll of around 180,000.

Russia’s Defense Ministry reported earlier this week that the country’s lowest coronavirus mortality rate is in the Armed Forces, citing the military’s sophisticated network of telemedicine consulting and sixteen newly created mobile technical units. For the military, as well as large swathes of Russia’s public service and around 60 percent of Moscow’s service sector, vaccination is mandatory. But there is research to suggest that vaccine hesitancy remains high among the general population despite the Kremlin’s ongoing public relations campaign to encourage nationwide mass vaccinations. According to survey data provided by the Levada Center, Russia’s vaccine hesitancy rates are among the highest in the world. Among those who say they are not ready to get vaccinated, a plurality are concerned with potential side effects and as many as 41 percent say that they will not get vaccinated under any circumstances. From recipients using prosthetic arms to dodge the jab to reports of a sprawling black market for forged vaccination certificates, Russian vaccine detractors are employing a wide-ranging set of countermeasures to bypass vaccination requirements. Russian President Vladimir Putin has regularly encouraged all Russians to get the shot but does not support a compulsory national vaccination mandate, saying earlier this summer that such a measure would be “counterproductive.”

The Delta variant is roiling Moscow with a sudden surge in coronavirus infections and fatalities, but life in Russia’s capital is proceeding largely as normal—for now.  Sweeping mask and glove mandates are in place for most venues of public life in Moscow, including all stores, government buildings, corporate offices, the metro system, and more. These measures are religiously observed by public and private workers for fear of direct and enforceable professional repercussions. By the same token, Moscow’s coronavirus restrictions are largely disregarded by shop patrons, metro commuters, and others on the receiving end of services.

Russian Health experts have warned that Moscow and other urban centers could be on the cusp of a new spike in coronavirus cases, spurred by the start of a fresh school semester and the return of summer vacationers back to the country’s large cities. Russian authorities have estimated that, if the national vaccination rate does not pick up significantly, healthcare outlays on coronavirus patients can reach 111.4 billion rubles, or upwards of 1.5 billion dollars, in the second half of 2021.

There is mounting speculation that the ruling United Russia party may reintroduce much harsher coronavirus restrictions in Moscow, including a return to a QR code system for access to restaurants, most shops, and the metro system, shortly following its likely victory in the September 2021 Russian legislative election.