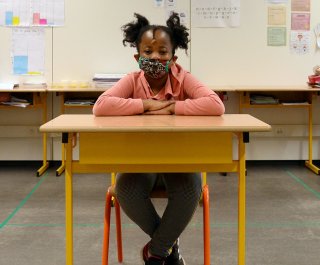 At least 97,000 children in the United States tested positive for coronavirus during the last two weeks of July, according to a new review of state-level data by the American Academy of Pediatrics and Children’s Hospital Association.

The release of the report comes as many schools across the nation grapple with how best to reopen classrooms safely. The Trump administration has pushed for in-person classroom learning while others have voiced support for virtual or hybrid educational models.

Since the beginning of the pandemic, at least 340,000 children have tested positive for the novel coronavirus—representing nearly 7% of all U.S. cases to date. According to the report, the rise in child cases was largely driven by states in the South and West, including Missouri, Oklahoma, Georgia, and Florida. Other states with rises also included Montana and Alaska.

Despite the troubling increase in the number of child infections, the report’s data revealed that most children do not get critically ill with the contagion. The current rate of hospitalization for children remains low at just 2%.

The findings are supported by the Centers for Disease Control and Prevention, which recently released guidance saying that children are less likely to experience severe symptoms from the coronavirus. The agency added that schools should reopen at least partially unless community transmission is high or uncontrolled.

The available evidence, however, is still mixed about whether children play a major role in spreading the coronavirus to other children and adults.

According to a large study out of South Korea, children younger than ten transmit to others much less often than adults do, but the potential risk doesn’t go all the way down to zero. Those between the ages of ten and nineteen are able to spread the virus at least as easily as adults do.

He noted that countries should use a “risk-based approach” while continuing to be “vigilant.”

“We all want to see schools safely reopened but we also need to ensure that students, staff and faculty are safe,” Tedros said.

There are now more than 20.1 million confirmed cases of coronavirus worldwide, including at least 738,000 deaths, according to Johns Hopkins University.

America has almost 5.2 million confirmed infections and more than 164,000 deaths.