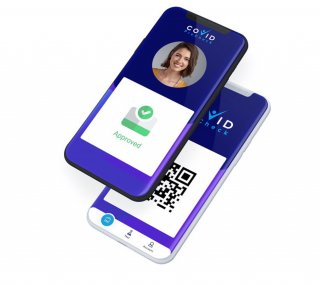 When it comes to scenarios for how the U.S. economy may someday return to normal following the coronavirus epidemic, many of them involve large numbers people somehow being able to prove that they’re free of the virus. This would hypothetically apply to those who have recovered from coronavirus, or who have been vaccinated, in the event of a future vaccine becoming available.

Soon, a mobile app will offer something along those lines.

A company called NetObjex, Inc. has announced that it will soon debut an app called COVID PreCheck. The app will allow users who have tested positive for COVID-19 antibodies to show a “TSA PreCheck-style clearance,” allowing users to “more quickly and safely return to work and resume their normal lives.”

Using what the company calls secure blockchain technology, the app will connect users to testing centers to take coronavirus antibody tests, and the providers will then verify those results to the app. This will then produce a QR code, which can be presented on the app to either employers or, eventually “airports, restaurants, cinemas, theaters, shopping malls, cruises, and sporting venues.”

“In much the same way that Facebook or Google IDs are digital identities, these “passports” will provide digital records of COVID-related exposure, which will be securely maintained using blockchain technology” Raghu Bala, founder of NetObjex, said in the announcement.

“This technology is tamper-resistant and also prevents fraud and forgery. Our team has vast experience in developing systems that meet strict HIPAA standards and guidelines for large health insurance companies. We will apply these same rigorous privacy standards to the PreCheck app.”

The app sounds like something that could potentially be useful, especially when it comes to re-opening such large venues as theaters and sports arenas. However, it also raises many questions.

For one thing, much remains unknown about how immunity to the coronavirus works, as well as about the specificity of antibody tests. It’s also unknown, and will likely remain unknown for a while, whether those who have recovered from coronavirus will retain immunity permanently, or only for a limited period of time.

In addition, many questions have been raised about the fairness and equality implications of “immunity passports.”

“Experts warn that going down this route could create new problems, including discrimination in workplaces, or people deliberately trying to get infected so they can return to their jobs sooner, ‘playing Russian roulette’ with their lives,” a CNN analysis published Tuesday said.

Such a regime could also potentially create a bifurcated society in which those without the antibodies would face discrimination in favor of those with them, whether in terms of employment opportunities or being turned away at the door of public events.

The medical journal The Lancet also recently looked at what it called the “scientific, equitable, and legal challenges” associated with immunity passports.

The company behind COVID PreCheck acknowledges that “some people may feel uncomfortable with the idea of COVID ‘clearance,’ but… the app is not a mandate or a legal requirement,” James Lang, a blockchain specialist involved in the effort, said in the announcement.

Also, for the PreCheck system to be effective would likely require significant buy-in from businesses, and eventually from sports leagues and event operators.

The app, the company said, will launch later this month, and is free to use for a year. The website lists both the iOS and Android app store logos.